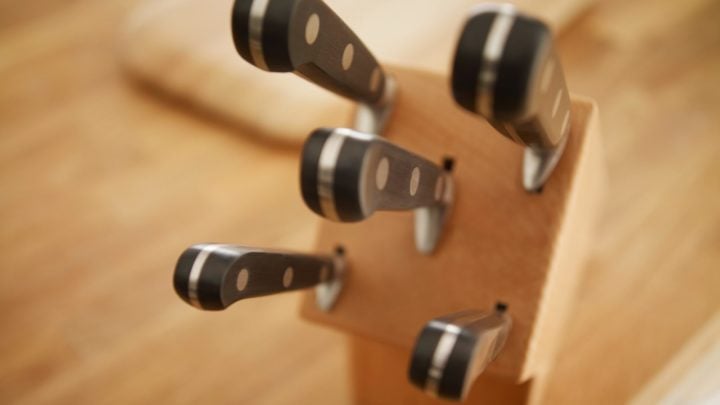 Police in the UK will replace kitchen knives with blunt blades in the homes of 100 domestic violence victims. Source: Getty

A new plan by UK police to replace sharp kitchen knives with blunt blades in the homes of domestic violence victims has been slammed – with many claiming it’s an “insane” idea.

Nottinghamshire Police in the United Kingdom have launched the scheme, which will see 100 “no point” knives given to victims who had previously been attacked or threatened with a knife, The Independent reports.

Speaking to the news outlet about the plan, Superintendent Matt McFarlane – who is overseeing the scheme – said the aim is to reduce the risk of stabbings for victims who fear for their lives.

“This is a measure we need to take,” he reportedly said. “We want to reduce that risk. It is a trial. We have about 100 of them – and we have so far given out about 50. The knife is blunt at the end – but still functions as a knife – so you can’t stab someone.”

McFarlane added: “People will stay in a relationship after some serious episodes of domestic abuse. They may stay together for children, get back together, or might get back together when they are out of prison.”

However, the scheme hasn’t been met with much praise from the public, who have labelled it a ridiculous idea that won’t make any difference to the safety of domestic violence victims.

Meanwhile, others have claimed the £1.5 million (AU$2.7 million) funding boost for the plan is a waste of taxpayers’ money, with funds better spent dealing with the perpetrators.

“My take on the Nottinghamshire Police scheme of handing out blunt knives to domestic abuse victims, it reinforces the wrong, widely held vision of domestic abuse as a crime of passion,” one person wrote on Twitter.

“Confusing for victims of DV and their children,” another claimed. “How are you supposed to cook/chop food with blunt utensils. Isn’t this sending out the wrong message how victims of DV are being supported by the police. If a perpetrator of DV wants to injure/kill/threaten they will use any object.”

A third added: “Nottinghamshire Police thinks exchanging kitchen knives for blunt point kitchen utensils is a solution to domestic violence. Surely they’re not serious. Have you actually gone ahead and spent money on this @NottsPolice.”

Another simply said: “This is an insane idea.”

There have however been some who are on board with the decision, claiming any action to prevent domestic violence is a positive step forwards.

“It won’t be the only tactic used to try to reduce the abhorrent violence in people’s homes,” someone said. “Any effort to reduce violence and abuse is worth exploring.”

Another wrote: “It’s a good idea, in my opinion. Kitchen knives are dangerous in the wrong hands.”

Do you think it is a good idea to replace kitchen knives with blunt blades? What else do you believe needs to be done to reduce the amount of domestic violence?