‘I was being a d***head’: Nick Kyrgios apologises for Australian Open rant 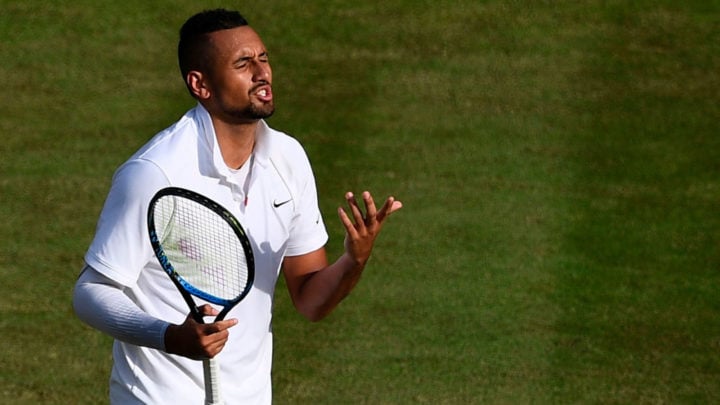 He is known as the bad boy of Australian tennis, regularly launching into passionates tirades on the court, and Nick Kyrgios let his temper get the better of him again on Thursday as he blasted his coaches during his match against Gilles Simon.

Kyrgios turned his frustrations on his own supporters yesterday though as he blasted those gathered in the player’s box after they told him to “stay tough” following the third set as he faced the French veteran in the second-round of the Australian Open.

However, following the rant, Nick publicly apologised for the episode, branding himself a “d**khead” to reporters. According to the Daily Mail, he said: “I was being a bit of a d***head to them. I apologised as soon as I went back into the locker room.

“They don’t deserve that. They do a lot of things for me on and off the court. No, it’s not acceptable from me. Nothing to do with them.”

Kyrgios and Simon give their best Nadal impersonations when given their respective time violations. 😂

They seem pretty spot on!

During the game, Kyrgios also got a laugh as he did an impression of world number one Rafael Nadal as he imitated the tennis ace’s rituals. Simon then did the same, earning both players a rapturous response from the crowd in Melbourne who could be heard whistling and jeering.

While the majority of people saw the light-hearted side of the antics, others thought the players were “repulsive” for poking fun at Nadal and took to social media to share their views. One person wrote: “Nadal is gorgeous they are revolting – that’s the difference. I wonder why Nadal was so kind and generous giving so much money to the Australian wild fire fighting. Rafa is so good and kind and generous. Kyrgios is a jerk.”

Another wrote: “This isn’t funny. Why are they obsessed with Nadal’s rituals? If they imitated his winning mentality they might have achieved more instead of mocking him.”

While others defended Kyrgios, with one person writing: “Fair play. Nadal gets away with murder & knows EXACTLY what he’s doing. He is allowed to make the SERVER wait until HE HIMSELF is ready which is backwards.”

Another said: “You are correct. Nick just has the guts to speak the truth. Slow play ruins tennis.”

Are you a fan of Nick Kyrgios?