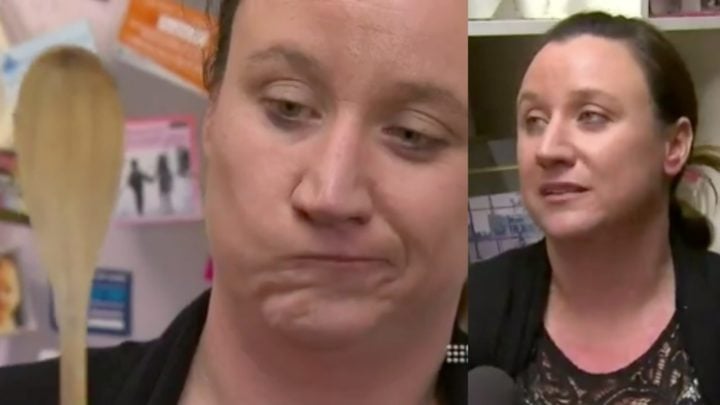 Tania was convicted and fined for smacking her nine-year-old daughter with a wooden spoon as punishment. Source: Twitter/ Nine News Perth

An Australian mum, who left her child with a bruise after smacking her with a wooden spoon, has been convicted of common assault and fined $750.

Tania, 35, appeared in Perth magistrates court on Wednesday over the incident which took place in October 2018 which involved her nine-year-old daughter, Nine News reports.

The woman had witnessed her child eating old meat out of the fridge meant for the dog that she had specifically been told not to consume and reportedly lashed out in what her lawyer described as a “moment of frustration”.

A bruise formed on the young girl – who apparently has behavioural issues and suffers from ADHD – from the smack which was later seen by another individual who then reported it to the police, according to the broadcaster. Tania was charged over her actions and, after a difficult nine months, faced court on Wednesday where she received her sentence.

“You struck your nine-year-old with a wooden spoon and by your plea you accept that the force you used was more than necessary to correct her,” the magistrate said, according to WA Today.

“I’m satisfied this is unlikely to happen again.”

An Ellenbrook mother has been hauled before a court for smacking her nine year old daughter with a wooden spoon. She opened up to #9News this afternoon. @teagansapwell9 pic.twitter.com/76gxT7gedz

Speaking to Nine News about the incident, Tania defended her actions, claiming she shouldn’t be charged for punishing her child in such a way.

Feeling angry and disappointed, the mum said she “hasn’t been the same since” and was crying throughout the interview with police.

“I believe that discipline helps our society and our children, they’ve got to learn respect and integrity and you just can’t get away with doing naughty stuff,” she told Nine News.

“How do we do that now these days?”

The ruling has sparked a huge debate across the country with many showing support for the mum, commending her actions and claiming smacking is an effective way for children to learn respect.

“I feel for the mum,” one person wrote on Twitter. “It’s not as if she bashed the child senseless. If these laws were in effect when I was a child, every parent then would be ex-cons now. I think a firm spank is oaky and would probably benefit the child in a lot of cases.

Read more: French parents to be banned from smacking their children

“In the old days most mums used a wooden spoon. The nuns used a thick strap. It may hurt but we learned respect,” another said.

While a third added: “What a beat up. I hope she has the sense to start a GoFundMe to cover her costs. Christ my mother used to buy them in packets of three and break one across my a** or legs almost weekly.”

However, others condemned the act and said hitting a child in any way is never acceptable and it was right to convict the mother for the smacking.

“Hitting a child is not OK,” someone claimed on Twitter. “If you lose your s**t enough to hit a child then as an adult you have anger issues. If she was that worries she should have taken the child to the doctor. Not acceptable.”

A second wrote: “Smacking a child just shows an adult that can’t control themselves.”

Do you think it was right for the mother to be convicted for smacking her child? Were you ever smacked as a child?