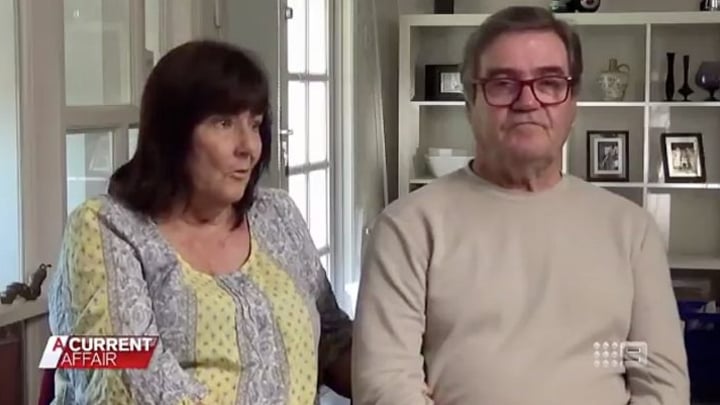 The family of an elderly woman who was suddenly kicked out of her home at the age care facility have shared their disbelief in the situation. Source: Twitter/ A Current Affair

The family of an elderly dementia patient, left stranded outside a Queensland nursing home after it abruptly closed down have called for those responsible to be held accountable for their actions.

Michael Irvine was left devastated when he found out via social media that his beloved mum Veronica had like many other vulnerable residents been kicked out of Earle Haven Retirement Village on the Gold Coast and left outside last week with no idea what was going on, Nine News reports.

However, the residents and their family members were left in the dark about the situation with Michael explaining to A Current Affair that he never received a phone call from the facility and still hasn’t heard anything from them.

“All I knew was that the staff had left… the police were in there and the ambulance, that’s all I knew,” he explained on the program on Friday night.

They should have been safe and cared for, but instead they were forced out and left to fend for themselves. #9ACA | FULL STORY: https://t.co/un15zgYu6k pic.twitter.com/1xUn7LEyTs

“You couldn’t believe it… you wouldn’t treat your animals like that. I’m thinking, they can’t do that.”

Veronica had been living at the facility for eight and a half years with her husband George, who sadly passed away just one month ago.

She suffers from severe dementia, has no ability to communicate and can barely recognise her family, making the situation all that more distressing.

“Who walks out on old people?” Michael’s wife Glenda exclaimed.

“To walk out away and leave elderly people, most of whom have dementia, to fend for themselves.”

Their shock and outrage was echoed by Queensland Nurses and Midwife’s Union Secretary Beth Mohle who told A Current Affair, it’s time to re-think the whole industry before this happens again.

“We think this is the poster child, if you like, for the problem with what’s wrong with the aged care system,” she exclaimed.

“Is it still appropriate that profit can be made out of this?”

Meanwhile, following the shock incident last week it was reported an elderly woman was in a critical condition from a fall that occurred shortly after she was evacuated from the aged care care facility.

According to The Courier Mail, the woman “fell and hit her head” after being moved from the Earle Haven Retirement Village.

Despite the initial claims for the sudden closure of the facility, a HelpStreet spokesman told the ABC they left early because they couldn’t guarantee staff wages.

A claim which was then denied by People Care owner Arthur Miller who told the Gold Coast Bulletin that his company had agreed to pay employee wages for the final month.

“Earle Haven Retirement has no debt, we have all the money for employees but there are a lot of things we have to take care of,” Miller said. “We told them they had up until the 9th of August to leave the premises, they decided to leave earlier.”