Medieval chess piece sells for $1.3M after grandad buys it for just $9 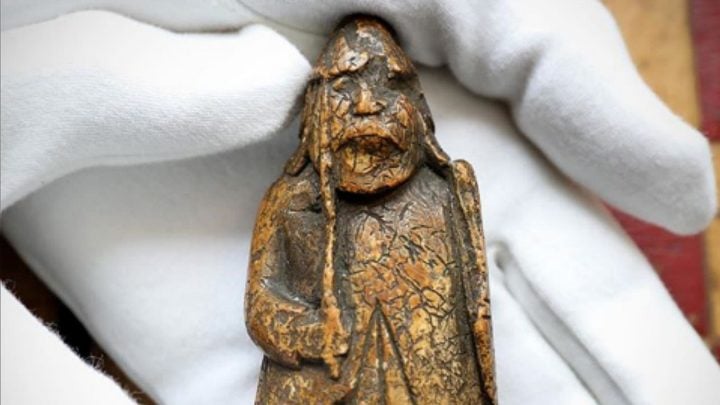 An antique Lewis Chessman piece, which had been stored in a drawer for years on end, sold for a staggering $1.3 million dollars. Source: Instagram/ Sotheby's

The unique item, identified as one of the most famous chess pieces in the world, is part of the Lewis Chessman set which was discovered in 1831 on the Isle of Lewis in the UK.

It was bought by a Scottish grandfather and antique dealer 55 years ago and has been passed down throughout the family, who were completely unaware of its value or rich history.

That was until this week when the famous walrus ivory carved piece was sold by Sotheby’s auction house for the staggering price to an unnamed buyer, the BBC reports.

The Lewis Chessmen set is a prized collection of 93 pieces, with 82 of them on display in a British museum in London and a further 11 kept safely at the National Museum of Scotland in Edinburgh. The remaining five pieces’ whereabouts are currently unknown, with the most recent discovery the first to be found since 1831.

“The remarkable hoard constituted the greatest ever discovery of medieval chess pieces, and from the moment they were unearthed, the Lewis Chessmen evoked their own mysterious world, steeped in folklore, legend and the rich tradition of story-telling,” auction house Sotheby’s explained on its website.

This newly discovered warder attributed to the Lewis Chessmen workshop goes on view in our #London galleries today, ahead of Tuesday’s sale of Old Master #Sculpture & Works of Art. Acquired for £5 in 1964 by an antiques dealer in Edinburgh and passed down the same family by descent, the #medieval chess piece was stored away in his home before being inherited by his daughter, who believed it was special and perhaps imbued with some magical significance. The warder then passed onto the next generation of the family, who approached Sotheby’s to shed light on what was in fact an important historic artefact. Our specialist Alexander Kader began a year-long study of the warder, deducing that the chessman to re-emerge could be one of the lost pieces of the Lewis group discovered in 1831. #SothebysSculpture #Chess

Speaking about the find, a family spokesperson explained their grandfather was an antiques dealer and had purchased the piece back in 1964 from another dealer.

They said at the time it was catalogued as an antique walrus tusk warrior chessman, giving no hint away as to its important history.

“It was stored away in his home and then when my grandmother died my mother inherited the chess piece,” the family member explained. “My mother was very fond of the chessman as she admired its intricacy and quirkiness. She believed that it was special and thought perhaps it could even have had some magical significance.”

The discovery was especially momentous for Sotheby’s expert Alexander Kader who said it was “one of the most exciting and personal rediscoveries” to have been made during his career.

“It has been such a privilege to bring this piece of history to auction and it has been amazing having him on view at Sotheby’s over the last week – he has been a huge hit,” he told the BBC.

“When you hold this character warder in your hand or see him in the room, he has a real presence.”

Have you ever discovered something valuable like the chess piece? What would you do with the money from the sale?