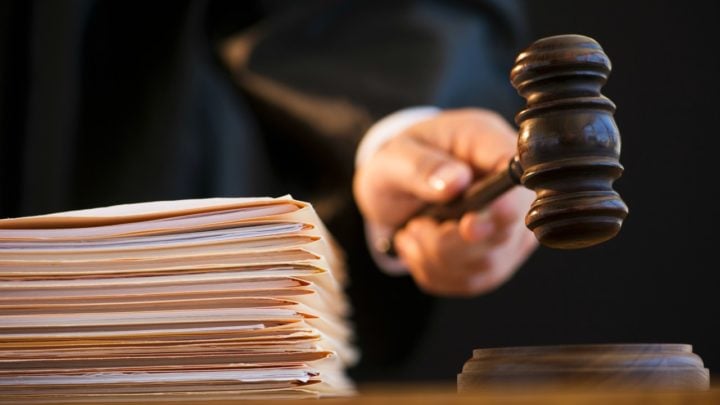 Mark Kenneth Jenkin was sentenced to 19 years behind bars for the manslaughter of Mark Dower in 2015. Source: Getty

A man dubbed the ‘Monster of Mangerton’ will spend almost 20 years behind bars after being found guilty of brutally bashing a pensioner to death and stuffing his body in a surfboard bag.

Mark Kenneth Jenkin appeared in the NSW Supreme Court on Thursday where he was handed a 19-year jail sentence for the manslaughter of Mark Dower in 2015, The Illawara Mercury reports.

The 47-year-old, who was found guilty of the charges last year, reportedly left his 56-year-old victim with broken ribs, fractures to his upper jaw, a bleed on his brain, a tooth in his stomach and “severe trauma” to the front of his mouth after bashing him severely over a number of days.

The court heard that Jenkin then stuffed Dower’s body into a surfboard bag and enlisted the help of a woman to move the body to a communal laundry area at the unit block, where it remained hidden for a number of weeks.

Speaking about the incident in court Senior Constable Pep Reid explained the moment she saw the bag in the room after detecting a “foul smelling fluid” coming from the area.

“There was fluids and maggots all around that area,” she told the court according to The Daily Mail. “I saw a hand through the tear and the skin was black.”

The court heard the attack took place after Dower was taken to Jenkin’s unit in March of 2015 to “sober up” so he could provide a statement to court over money police had reportedly confiscated from Jenkin. The Illawara Mercury reports the money was believed to be related to drugs that Jenkin claimed Dower had given him.

It was during the space of one week that Jenkin is said to have assaulted Dower in a series of “violent” attacks with his death taking place between March 22 and 28. The bag containing the victim’s body was later found on April 16 of the same year.

“I’m satisfied Mr Dower’s death was the culmination of days of intermittent violence at the hands of Jenkin,” Justice Hamill said in court according to The Illawara Mercury.

“The nature of extent of his injuries paint a violent and traumatic picture of Mr Dower’s last days… he suffered greatly.”

Jenkin was charged with the murder of Dower in November that year while he was behind bars for a different offence relating to a break and enter.

It was during this time that Jenkin reportedly conspired with his step-brother to murder the woman who had helped him move Dower’s body to the laundry area for fear she would speak out about the incident.

According to The Illawara Mercury, the pair planned to give her a lethal overdose of heroin but didn’t end up following through with their plan. Jenkin was also found guilty of conspiring to murder the woman.

On Thursday he was sentenced to 19 years in jail with a non-parole period of 14 years for the manslaughter charge.