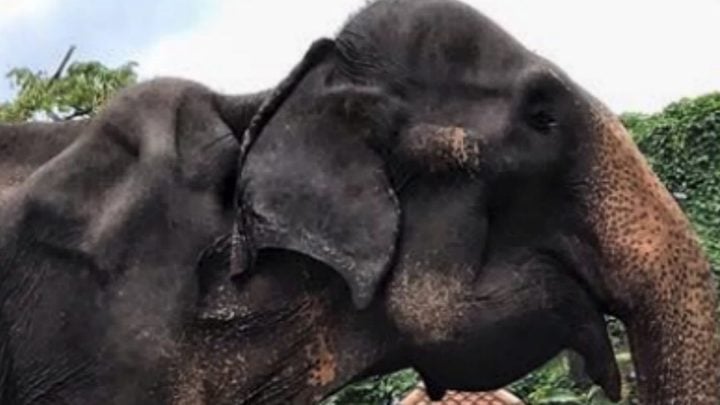 The malnourished elephant was forced to work at the annual Perahera Festival in Sri Lanka despite her frail condition. Source: Facebook - Save Elephant Foundation

Horrific images of a malnourished elephant have circulated online, sparking outrage among social media users. Save Elephant Foundation shared three photos of Tikiiri, a 70-year-old elephant, working at the annual Perahera Festival in Sri Lanka to Facebook on Tuesday in honour of World Elephant Day.

The frail and starving elephant can be seen in the pictures dressed up in a colourful robe that hides her body as she’s paraded around during the annual festival, which runs for 10 days each year. However, in two other photos, Tikiiri’s ribs, hip bones and spine are clearly visible.

“Tikiri joins in the parade early every evening until late at night every night for ten consecutive nights, amidst the noise, the fireworks, and smoke. She walks many kilometers every night so that people will feel blessed during the ceremony.”

The foundation added no one sees her “bony body” or “her weakened condition” because of the colourful robe. The post continued: “No one sees the tears in her eyes, injured by the bright lights that decorate her mask, no one sees her difficulty to step as her legs are short shackled while she walks.”

“For a ceremony, all have the right to belief as long as that belief does not disturb or harm another. How can we call this a blessing, or something holy, if we make other lives to suffer?” the foundation questioned. “Today is World Elephant Day. We cannot bring a peaceful world to the elephant if we still think that this image is acceptable.”

Social media has been flooded with comments from people who were disgusted and appalled by the images. “I hate what we continue to do to these beautiful majestic creatures,” one commentator wrote.

Another added: “How heartbreaking. I can’t believe they do this to her she is so old, skinny and fragile. She needs love and rest desperately I pray she can get released this is torture.” While a third wrote: “This is beyond awful – I have tears in my eyes. This beautiful lady needs to a sanctuary to live out her remaining days. This breaks my heart.”

This isn’t the first time a story on animal cruelty has made headlines around the world. In October last year the Greek government banned tourists weighing more than 100 kilograms from riding donkeys in Santorini. The Greek resort of Santorini sees millions of tourists flocking to its sandy beaches every year, with no signs of slowing down, and many who visit the city choose to take a donkey ride up the coastal city’s steep steps and pathways.

However, it was revealed that the over-worked animals are suffering from exhaustion, spinal injuries and saddle sores. The most popular track under fire for the mistreatment and overloading of donkeys is located on the western coast of the island where travellers are transported up 588 steps from the port at sea level to the capital city, Fira.

While the animal rides are usually advertised as the traditional and most prevalent form of transport around the island, it’s definitely not the only option. Travellers can choose to walk the half hour trip for free or use the much cheaper and more efficient option of riding the cable cars for a quick two minutes to the top of the mountain.

What are your thoughts on this? Do you think this is wrong? Does this make you upset? Does more need to be done to stop cruelty to animals?