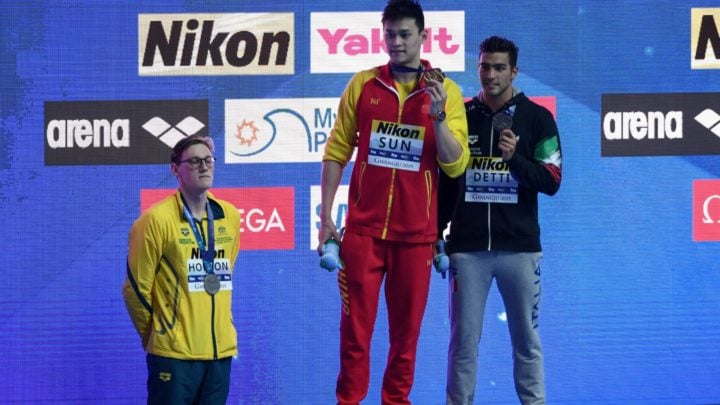 Mack Horton refused to stand beside his rival on the podium. Source: Getty.

Australian swimming star Mack Horton has sparked a fierce debate online after refusing to share the podium with accused drug cheat Sun Yang, despite finishing second behind his rival in the world championships in South Korea.

China’s Sun beat Horton to the top spot in the 400m freestyle by 0.73 of a second, making it his fourth-consecutive 400-metres freestyle title.

However, when it came time for the top three to share the podium, Horton chose to stand behind it as Sun took the middle spot. In fact, Horton even refused to pose for photos with his rival, instead standing back and having one alone with bronze medallist Gabrielle Detti of Italy.

Sun, who was suspended for three months for doping in 2014, is currently waiting to appear later this year at a Court of Arbitration for Sport (CAS) hearing after facing allegations of doping rule violations, the ABC reports.

That came after FINA, swimming’s world governing body, handed him a warning over alleged incidents at his home in China last September, which took place when a doping control team attempted to take blood and urine samples. It’s claimed he smashed vials of his blood with a hammer at the time.

Horton has previously made it clear he was unhappy that Sun was allowed to compete ahead of the hearing – which could spell the end of his career.

Asked how he felt after Sun’s win this weekend, Horton told reporters: “Frustration. I think you know in what respect.”

“I don’t think I need to say anything,” he added. “His actions and how it has been handled speaks louder than anything I could say.”

According to 7 News, Sun admitted he was aware Horton had a problem with him, but slammed the sporting star for disrespecting his country.

“I was aware that the Australian athlete had dissatisfaction and personal feelings towards me,” he reportedly said. “But it was unfortunate because disrespecting me is okay but disrespecting China was very unfortunate and I felt sorry about that.

“I’m aware of the rumours… [But] I think this has been the greatest achievement in history for the Chinese [swimming] team.”

Read more: Mack Horton undergoes surgery after fan spots something on his chest

While head coach Jacco Verhaeren is said to have had no prior warning of Horton’s protest, he had no issue with it.

“That was his idea to do that. But let’s put it this way, I understand him very much,” he said, 7 News reports. “He has been very strong and vocal about this in the past… you can only respect him for what he does. Mack stands for what he stands for. Nobody can take that away from him, nobody should.”

Horton has previously dismissed Sun as a “drug cheat”, while speaking ahead of the Rio Olympics.

The incident has divided people online, with many applauding Horton’s actions – while other claimed it was uncalled for.

One Twitter user wrote: “We stand with you @_mackhorton,” while another added: “Mack Horton continues to take a stance against Sun Yang refusing to stand on the medal dais with the man accused of smashing his own blood samples. Plenty of strength in his silence and swimmers around the world will stand with him. #westandwithmack.”

However others accused Horton of “humiliating” Australia, with one writing: “@_mackhorton Why are you kneeling on the podium when you are representing AUS!?!?!? Losing the medal is not an excuse to humiliating our country.”

And one wrote: “What a shame #mackhorton… This loser prefers to humiliate himself and his own country than to admit he is a runner up….#FINAGwangju2019.”

What do you think? Was Mack Horton right to shun the podium? Or do you think it was unsporting of him?