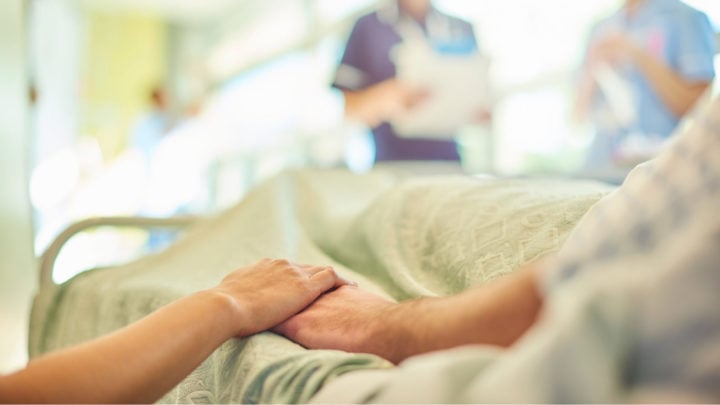 A heartbroken wife has spoken before the Aged Care Royal Commission about her husband's time in aged care before his death after he suffered a stroke. Source: Getty

A heartbroken wife has given a harrowing account of her late husband’s time in aged care and how the facility led him down a path of depression, social isolation and physical decline.

Michael Burge was just 58 when he passed away in residential care following a stroke two years earlier which caused significant damage to his brain. Within moments he went from being an independent man of 56 with his whole life ahead of him, to someone who could barely pronounce his words, struggled to walk and, according to his partner Kate Roche, was “more or less totally reliant on people for day-to-day activities”.

With no other options available, Michael was placed into residential aged care with people 30 years older and subsequently was allegedly unable to receive the help he really needed to get him back on his feet. Speaking before the Aged Care Royal Commission this week, Kate said her husband should have been able to live a meaningful and enjoyable lifestyle but instead was forced into a situation which caused much distress for the whole family.

Though much younger than the other residents, Michael was given limited independence and choice in what happened to him and sadly according to his wife, spent the majority of his time confined to a small bedroom. “He was in a dementia-focused setting that was not designed to provide him, as a younger person suffering from the after effects of a stroke, with the care he required to live well and continue to improve,” Kate explained. “Michael’s life got worse in aged care.”

During his time in the facility, Kate said she noticed Michael’s mental and physical health declining. He didn’t engage with activities that were offered as they were focused on the elderly and struggled to make any progress in his recovery from the stroke.

Instead of getting him out and about moving or assisting him to change sides during the night, Kate claimed they left Michael in bed for hours. While in hospitals the patient would be moved to prevent further pressure on the spine, Kate explained that didn’t happen in the aged care facility and sadly it meant his spine got worse and his legs became weaker.

Ultimately, this led to a fall and consequently his death after it was discovered he was suffering from kidney failure. Kate said they were sadly provided with no pathway other than aged care at the beginning of Michael’s treatment and claimed the Australian health system is not integrated. Instead of receiving a long-term plan for Michael to help him transition back into his old life, she explained no one would take responsibility for him and there was no assistance in breaking down the barriers to receive the assistance needed.

“Residential aged care facilities are seen as a place for people to be made comfortable as they prepare to die,” Kate told the royal commission. “Michael was not there to die and quite the opposite, he wanted to recover and recreate his life.

Kate is now calling for action to be taken to ensure others don’t end up in the same position as Michael. She suggested regular visits from allied health care practitioners to the facilities to keep up rehabilitation and in the long term the establishment of specialised disability accomodation for patients like her husband.

“All parts of the health care system must work together to ensure other young patients do not end up in dementia-focused residential aged care facilities because there is no other option available to them,” Kate added.  “These people should go to rehabilitation facilities or access special disability accommodation. Funding must be made available for this to occur.”

She went on: “My greatest nightmare was that once Michael left the rehabilitation unit, we would not get help to continue his daily regime, particularly because there would not be adequate facilities and staff to ensure he went to the gym to do his exercises. My nightmare became a reality at the residential aged care facility. In my view, if Michael had not entered residential aged care and if other options had been available, he would still be here today.”

Have you had a young loved one in an aged care facility? What do you think needs to be done to help people in Michael's case?