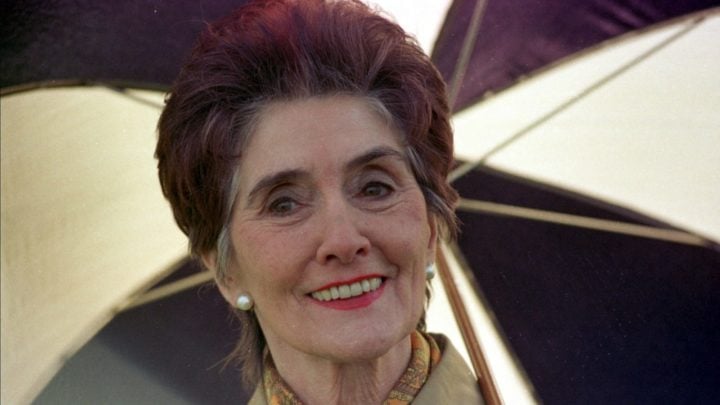 June Brown has the left the show after 35 years. Source: Getty.

The 93-year-old actress made the revelation on the Distinct Nostalgia podcast to former co-star Rami Singh, who played Sufia Karim on the show, saying she has been disappointed in recent storylines and turned down the chance of a retainer contract. Brown said her character Dot has left Albert Square for good.

“I’ve sent her off to Ireland and that’s where she’ll stay,” she said. “I’ve left EastEnders. I did make up a limerick. It’s a bit dirty. I went back to do a good story. Alas and alack, when I got back it had gone up in smoke.

“Well, that is no joke. I got a small part, a very small part. And that ended up as a big wet fart. Alas, and alack, I will never go back.”

Brown won several awards for her role in the soap, including a lifetime achievement honour at the 2005 British Soap Awards, and in 2009, she was nominated for the best actress prize at the TV Baftas.

During her podcast appearance, Brown said she had already mourned her character.

“I was feeling down a few days ago,” she said. “I thought, ‘What’s the matter? Why do I feel so sad?’ It’s almost as if I’ve been bereaved. I’ve played two people simultaneously for 35 years. Really, Dot wasn’t me, but spiritually she probably was.”

Brown’s character has not been seen on EastEnders since last month after discovering that Martin Fowler (played by James Edward since 2014) was responsible for stealing her savings — despite her own granddaughter Sonia Fowler (played by Natalie Cassidy) being to blame. In her final scenes, Dot left a voicemail for Sonia informing her she had moved to Ireland.

According to an EastEnders spokesperson, the “door remains open” for Brown to return. “We never discuss artists’ contracts, however as far as EastEnders are concerned the door remains open for June, as it always has if the story arises and if June wishes to take part.”

The news comes almost a year after Sandy Ratcliff, who was one of the original stars of the popular show, passed away at the age of 70. Ratcliff was best known for playing Sue Osman in the British soap opera between 1985 and 1989.

Do you remember watching EastEnders with June Brown?