‘She’s up for anything!’: Judi Dench takes on fun new project with grandson 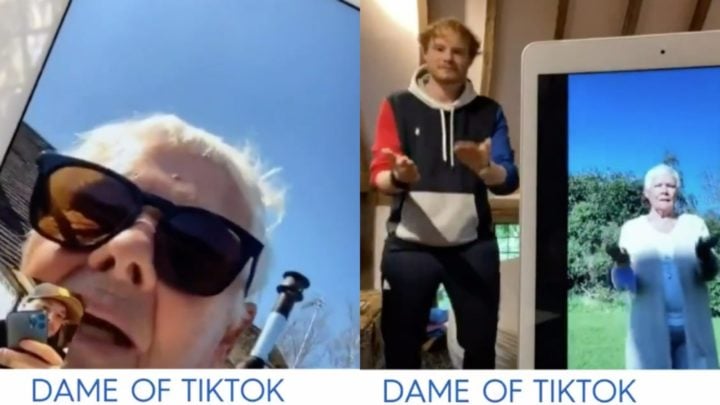 Dame Judi Dench is no doubt one of the greatest actresses to grace our screens, but now, the grandmother has made a name for herself for another reason, joining her grandson in a series of hilarious social media videos during the coronavirus lockdown.

The 85-year-old has proved you’re never too old to learn something new, learning all about TikTok – a relatively new social media app which allows users to create and share funny videos of themselves. It’s something you’ve probably seen you’re own grandkids using of late, and perhaps Dench will inspire you to join in with them next time their creating something fun.

Over the past couple of months Dench’s grandson, Sam Williams – the daughter of Finty Williams – has shared numerous videos of himself and his grandmother dancing together, and telling jokes via the app. And he’s gained quite the following in the process.

Dame Judi Dench has become a social media sensation – starring in a series of videos with her grandson on TikTok. #9Today pic.twitter.com/u37RQp3EHB

Now, Sam has spoken out about the experience and his close relationship with Dench in an interview with The Today Show. The 22-year-old appeared on the program on Saturday to discuss his rising fame and his grandma’s new followers.

“She’s up for anything to be honest,” Sam told host Richard Wilkins. “She saw my profile growing and really wanted to be a part of it. I got my mum involved too – so it’s a family affair. The first video she learnt in about an hour. I taught her the moves on FaceTime and she absolutely smashed it. The second one was a bit more tricky but it was still so much fun to do with her.”

Sam said his fans have been “absolutely loving” the videos starring his grandmother and are interested to see what life is like for Dench in lockdown, away from the usual glamour of Hollywood life.

“I’m so glad I can show them my grandma and what she’s done in lockdown. And I think a lot of people are quite interested in that, seeing someone whose normally in the limelight to just be at home. She’s doing alright, she’s jumping into Zooms which is really nice. Every day she just gets stronger and stronger and there’s new work around the corner which is really exciting.”

Dench has forged a long and successful career on the big screen, starring in many hit films and most recently, making her debut on the front cover of the British Vogue magazine, but the actress said she still has one secret and saucy regret. Though she’s known globally as one of the great Hollywood stars, the 85-year-old admitted she wished she’d done more sex scenes. In a recent interview with The Mirror, Dench said: “I have done a few bed scenes. Not many in the theatre. What a disappointment.”

Though it may be a big regret of the star, she’s certainly made a name for herself in the industry. From the much-loved James Bond movies to Shakespeare in Love, Notes on a Scandal and Philomena, Dench has come a long way from the day when she was told she’d “never make a film”.

According to the talented actress, in the early days of her acting career she was told she didn’t have a face for movies and would likely never star in a hit film.

“They told me I would never make a film,” Dench told The Mirror. “To which there is no reply. I put my chair against the wall. I am not quite sure why. I walked out.”

She added: “I did not want to do films anyway. I never thought I’d have a future in films as the stage is my passion. It’s never ever the same in a theatre, never. You always got a different reaction to things.”

Are you a fan of Judi Dench? Do your grandkids use TikTok? Have you joined them in trying out the app?