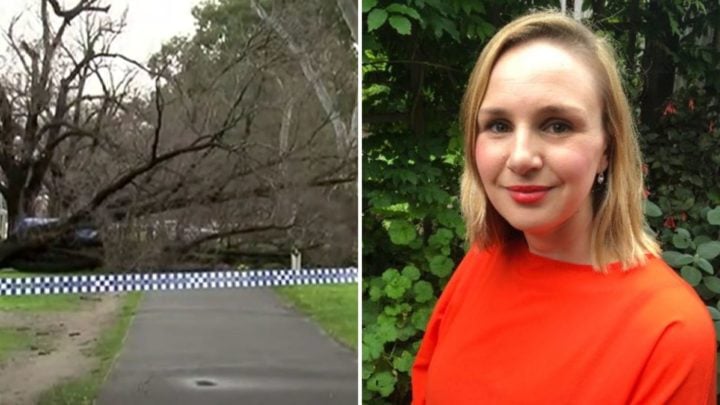 The jogger killed by a falling tree in a Melbourne park on Monday has been identified as prominent research professor Allison Milner. Source: ABC News Live/Twitter.com/AllisonMilner2

The jogger killed by a falling tree in a Melbourne park on Monday has been identified by friends and colleagues as prominent research professor Allison Milner. Friends and family of the 36-year-old have paid their tributes to the young mother on social media, remembering her as brilliant, generous and compassionate.

According to Milner’s Twitter page, she was a social epidemiologist with a keen interest in gender, work, worklessness, disability, mental health and suicide. She was also a senior research fellow at the University of Melbourne and had a ph.D, a Masters in Epidemiology and an Honours degree in psychology.

Victoria Police confirmed to Starts at 60 on Monday that Milner was struck by a tree in Parkville and was located with critical injuries at around 8:30am. She was transported to hospital in a critical condition but died of her injuries.

While police are preparing a report for the coroner, family, friends and colleagues have paid their respects. Milner’s colleague Marie Bismark took to Twitter on Monday evening and wrote: “My colleague Allison Milner was a brilliant researcher, a generous colleague, and a loving mum.”

She added: “Australia’s largest study of suicide by doctors, among many other research projects which made a difference in the world. She will be deeply missed.”

Another friend Jane Austin wrote: “Devastated to learn of the sudden loss of @unimelb academic and inspirational researcher, @AllisonMilner2. My deepest condolences to Allison’s family and friends, and work colleagues. Take care of those around you.”

My colleague Allison Milner was a brilliant researcher, a generous colleague, and a loving mum. She led Australia’s largest study of suicide by doctors, among many other research projects which made a difference in the world. She will be deeply missed. https://t.co/V2gfoVqfyD

Fellow professor Anne Kavanagh found it hard to put her loss into words, but did her best. She said: “It is impossible for me to describe how big a loss this is for me and the public health community. And her wonderful family.”

Researcher Anna Scovelle added: “Allison was the most driven person I’ve ever met, and yet, she always made sure she brought others along with her in her success.

“Allison, I owe you so much and I am beyond grateful for the years I had the privilege of working with you.”

Condolences to family and @unimelb colleagues of Allison Milner

Wendy Iverson, another one of Milner’s colleagues, explained why she would miss her friend and tweeted: “Can’t stop thinking of @AllisonMilner2 and this devastating loss. My heart is so heavy for her family.

“We will miss her for all the wonderful things that made her so very special, her love for her family, her wit, her dedication, her beautiful soul, her brilliant work ethic.”

Sunrise reporter David Woiwod was at the park in Parkville on Tuesday morning, where he revealed the community is in mourning. He explained that Milner was a mother of two young boys aged three and five.

36-year-old mother Allison Milner has been named as the woman who died after being struck by a falling tree while jogging in Melbourne. pic.twitter.com/wDXwu8zHuT

She had been walking along a footpath when the 103-year-old tree fell and crushed her, with arborist Les McKeown explaining: “There may have been signs of it failing, but unless you’re someone that’s looking at trees every day, you may not have noticed.”

It comes days after another woman died in Victoria after a tree crushed her family’s car amid wild weather. Angie Suryadi, who was in the front passenger seat of the car, passed away while her husband, driver Arnold Adiatiasvara, and their two sons were rushed to hospital. One of them remains in a critical condition.

The family were travelling along the Maroondah Highway in Fernshaw, north-east of Melbourne, when Victoria Police confirmed the tree blew onto their moving car. Some of Angie’s closest friends have remembered her in a heartbreaking social media post, shared by Australia for Christ Church Indonesia.

Have you been following this story? Do you have a message for Anne Kavanagh’s family?