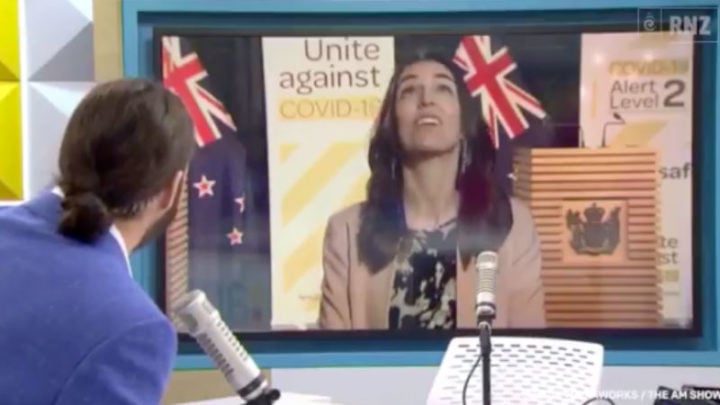 New Zealand Prime Minister Jacinda Ardern was forced to halt a live interview for a rather unusual reason this morning, as an earthquake rocked The Beehive in the country’s capital.

The NZ leader was conducting her weekly interview from parliament on The AM Show on Monday when after a 5.8 magnitude earthquake struck the North Island at around 7.50am, with the effects being felt in Wellington and the surrounding areas for around 15 seconds.

But, despite the room shaking visibly around her, Prime Minister Ardern looked unperturbed and simply declared: “We’re just having a bit of an earthquake here Ryan, quite a decent shake here … if you see things moving behind me. The Beehive moves a little more than most.”

“Has it stopped prime minister, or is still going? And you’re feeling safe and well to continue the interview?” host Ryan Bridge then asked Jacinda.

“Nope, we’re fine Ryan,”she replied with her signature wide smile. “I’m not under any hanging lights. I look like I’m in a structurally sound place.”

Why am I not surprised that Jacinda Ardern casually takes an earthquake interrupting her interview in her stridepic.twitter.com/mq4h6LuTfC

People couldn’t believe the prime minister’s nonchalant reactiod to the quake, with many taking to social media to praise her attitude. One person wrote: “Why am I not surprised that Jacinda Ardern casually takes an earthquake interrupting her interview in her stride.”

Another wrote: “Jacinda Ardern is a BAD-ASS! Hope folks in Wellington are OK!” While another commented: “Calm on live TV during an earthquake. True grit. Bravery.”

The earthquake was centred 30km north west of Levin, which is around an hour’s drive north of the country’s capital. So far the earthquake has been followed by over 45 aftershocks, according to national agency GeoNet.

That was a sharp shake for a Monday morning, NZ! M5.8, centred 30 kilometres NW of Levin and 45 kilometres deep. We've registered nearly 37,000 felt reports from all over the country – from north of Auckland to Dunedin. Hope everyone's OK! #eqnz https://t.co/HRXg8fQ2RZ pic.twitter.com/qgZFEL4SRW

“That was a sharp shake for a Monday morning, NZ!” the agency wrote on Twitter. “M5.8, centred 30 kilometres NW of Levin and 45 kilometres deep. We’ve registered nearly 37,000 felt reports from all over the country – from north of Auckland to Dunedin. Hope everyone’s OK!”

Have you ever experienced an earthquake?