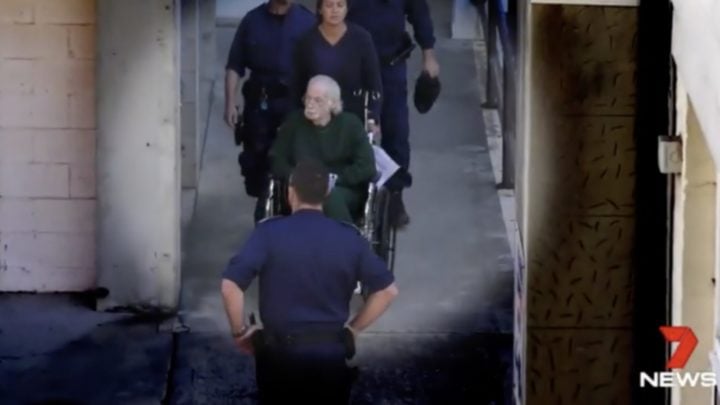 Ivan Milat, pictured in May, has been readmitted to the Prince of Wales Hospital with a serious infection. Source: 7News.

Terminally ill serial killer Ivan Milat has reportedly been rushed back to hospital, suffering with a “serious infection”. Earlier this year it was revealed that the backpacker murderer had been diagnosed with incurable stomach and oesophagus cancer.

According to 7News, Milat was transferred from Long Bay Jail to Sydney’s Prince of Wales hospital on Friday afternoon where he was readmitted after medical staff at the jail struggled to sufficiently cope with the treatment. It has not been confirmed whether the 74-year-old convicted killer’s condition is life-threatening.

It’s the second time in a matter of months that Milat has been admitted to hospital as, in May this year, he was taken from Goulburn Supermax to the Prince of Wales Hospital in Randwick where he remained for two weeks. He was then transferred into the care of corrective officers in the secure hopsital wing of Long Bay, rather than returned to the supermax prison.

His transfer from hospital marked the first time that the notorious murderer had been seen in public in more than a decade, as cameras captured Milat being pushed out of hospital in a wheelchair and moved into the back of a van, while several officers stood guard. At the time, the killer appeared gaunt with his hair and famous moustache stark white.

Serial killer Ivan Milat has been moved from hospital to Long Bay jail, where he will live out his last days. 7NEWS cameras are following the operation. https://t.co/vir784UjAI #7NEWS pic.twitter.com/6fyWI0ApLV