‘It’s been hard’: Israel Folau admits his wife has struggled amid sacking saga 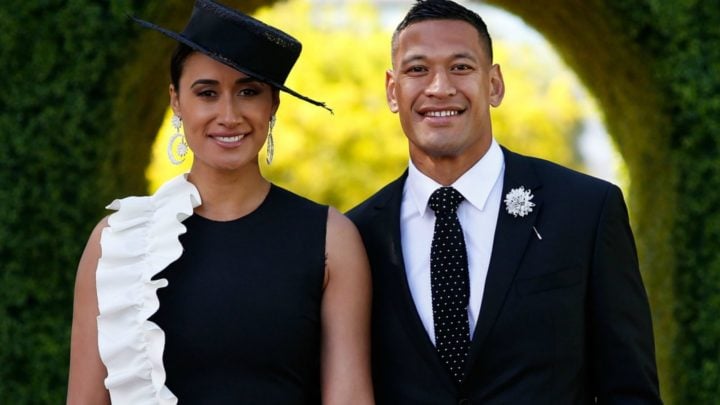 Israel Folau revealed his dispute with Rugby Australia has been "extremely hard" on his wife Maria. Source: Getty

He has barely been out of the headlines in recent months after posting anti-gay comments on social media, which led to the tearing up of his lucrative four-year contract with Rugby Australia.

Now, in his first public interview since being sacked, Israel Folau revealed his dispute with the organisation has been “extremely hard” on his wife Maria.

“Look it’s been extremely hard for her, she’s been dragged into this situation unexpectedly,” he told Alan Jones and Peta Credlin on Sky News Thursday night.

“It’s been very frustrating for her but I’m very lucky she’s a strong woman, she’s [the] same as me, convicted by her faith. She’s continued to march on and stay strong.”

He also added that he’s looking for an apology from Rugby Australia.

“I’m hopeful for an apology from them and admission that they were wrong,” he said. “That would be something that I would like to get.”

Folau also claimed his social media post came from a place of love.

“I can certainly see it from both sides, you know, and like I said, if I had a child that was a drug addict, I would certainly still love my child without anything attache­d to that,” he said.

“I’m trying to share in love, and that’s the way I look at it in terms of sharing the Bible and the passages with my fellow men each day.”

.@IzzyFolau on @RugbyAU offering him money to remove his controversial post: I felt I was backed in a corner … and agree to what they were asking … My faith to me is what’s most important.

He then claimed Rugby Australia offered him money to remove his post, but Folau said he couldn’t do it because “my faith to me is what’s most important”.

“I said no. I couldn’t do that as a person that’s convicted by my faith,” he said. “I felt like I was backed into a corner, into a boundary where I was put into one side where I had to compromise in order to agree to what they were asking. But in the end I couldn’t do it because my faith to me is what’s most important.”

In response, the rugby organisation said: “Following comments made on Alan Jones television show tonight (Thursday), any suggestion that Rugby Australia offered Israel Folau money to remove a post made on April 10, 2019, is completely untrue.”

Folau launched a legal appeal against Rugby Australia’s decision to terminate his contract earlier this month. In a statement shared just two weeks ago, the 30-year-old player said he felt his treatment by Rugby Australia and the Waratahs had left him with no choice but to stand up for his beliefs and the rights of all Australians.

Rugby Australia tore up his four-year contract after he shared posts on social media which suggested homosexuals, among other social groups, would be going to hell.