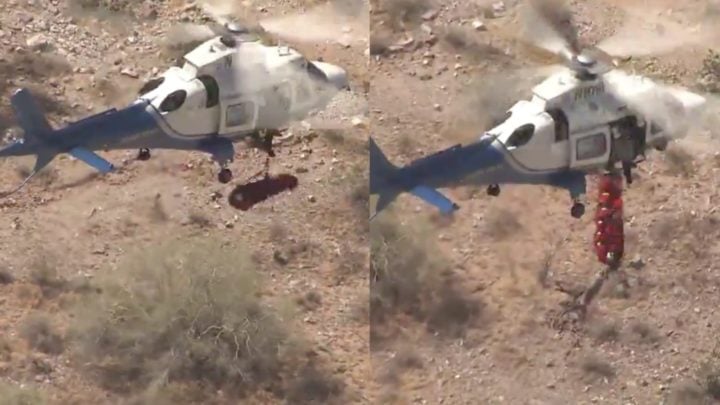 Horrific footage of an injured hiker spinning violently out of control as she was winched to safety by a helicopter has gone viral, as people across the world react to the dramatic rescue effort.

The 74-year-old woman reportedly fell and injured herself while hiking at Piestewa Peak, a mountain in the middle of Phoenix city, Arizona, when the helicopter was called to rescue her, The Washington Post reports.

However, a video – now widely shared online – captured the moment she began to slowly spin in circles as she was lifted off the ground on a stretcher.

As she got higher, the spinning only intensified until she was being sent in violent circles below the chopper – with rescue crews above unable to help her.

WILD HELICOPTER RESCUE: Firefighters say a 74-year-old woman had to be flown off of Piestewa Peak this morning after she suffered an injury while hiking.

The footage, captured by local media outlets KNXV and FOX 10 Phoenix, lasted for around a minute and has already been viewed right around the world.

Speaking in a press conference on Tuesday, the Phoenix Fire Department confirmed that it had happened before – but it was extremely rare. In fact, according to the Washington Post, they said that out of 210 helicopter hoist rescues on mountain missions in the last six years, only two had spun like this.

Paul Apolinar, the chief pilot of the police department’s aviation unit, reportedly explained: “Sometimes when we bring the helicopter up from the ground, [the basket] will start to spin… We have a line attached to the basket that’s supposed to prevent that. Today, it didn’t.”

Phoenix Fire Captain Bobby Dubnow told the news outlet that he spoke to the woman after the frightening ordeal and confirmed she’s in a stable condition and “suffered no ill effect from that spin, other than being a little bit dizzy”.

The footage gained a huge reaction online, with one person commenting: “I’ve watched this 100000 times today,” while another added: “Is that rope connected to the rotor??”

And one wrote: “This is 100% not okay. Spins can and should be controlled with proper tethering.”

Meanwhile more shared GIFs of the incident, with some re-posting footage from an old Simpsons episode, making light of the dramatic footage.

According to The Mirror, Derek Geisel, who was the pilot of the helicopter during the rescue, said the spinning lasted for 40 seconds after the line broke which usually prevents the spinning.

What do you think of this footage? Have you ever been involved in an emergency rescue?