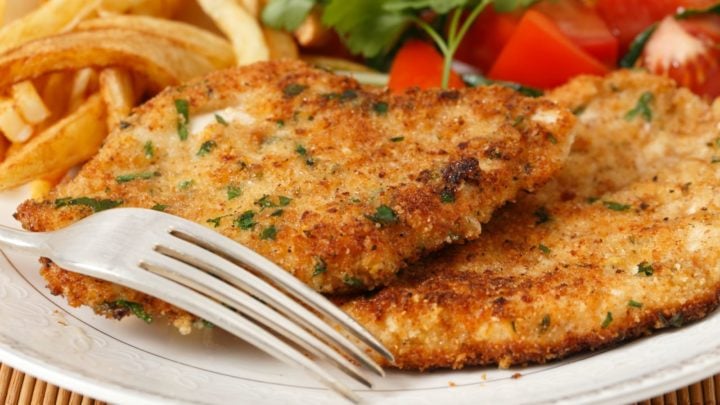 The recall is due to incorrect packaging. Source: Getty

If you’ve got a packet of chicken schnitzels in your freezer, you may want to check that they’re safe to eat.

Ingham’s gluten free chicken schnitzels are being recalled across Victoria amid concerns they contain gluten.

The company issued a statement on Wednesday, informing the public that the chicken snitches were being recalled.

“The recall is due to incorrect packaging (Southern Style Tenders were packaged incorrectly in gluten-free schnitzel labelled tray) which has resulted in the presence of undeclared allergen — gluten,” the company said. “Consumers who have a gluten allergy or intolerance should not consume these products.”

The product customers need to beware of is the specific 440 gram packs of chilled Ingham’s gluten-free chicken schnitzel with a best before date of April 8, 2019. The product has been available for sale at Woolworths stores in Victoria from March 29, 2019.

As a precaution, the products should not be consumed and should be returned to the point of purchase for a full refund.

The chicken snitches are the latest of an array of popular Aussie items that have been pulled from shelves in Australia this year. Eggs sold at Woolworths and other major stores around Australia were recalled due to fears of salmonella contamination last month.

Popular brand Bridgewater Poultry was forced to recall a number of products from shelves in Woolworths and independent stores in the ACT, New South Wales, Victoria, Tasmania, as well as Coles in Victoria and South Australia.

Any eggs marked with the identifying stamp AF58-099-035 through to AF58-099-065 may be contaminated with Salmonella Enteritidis and should not be consumed.