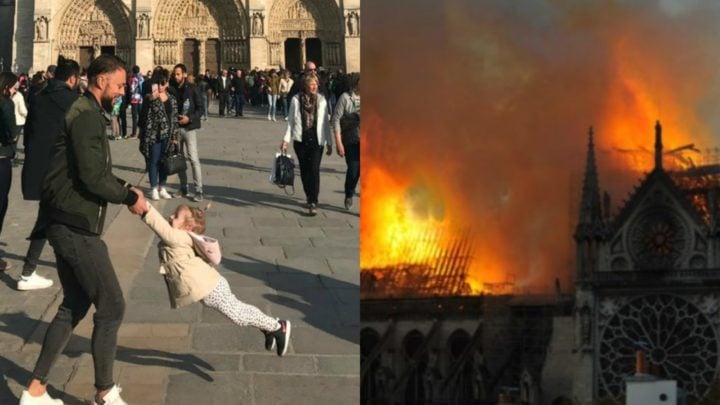 In the image, a man is seen spinning a giggling blonde toddler in the air outside the famous landmark. Source: Getty/Twitter - Brooke Windsor

A heartwarming picture of a father playing with his daughter in front of Paris’ iconic Notre Dame Cathedral, taken moments before tragedy struck, has gone viral.

In the image, captured by American tourist Brooke Windsor, a man is seen spinning a giggling blonde toddler in the air outside the famous landmark.

After news of the fire broke, Windsor shared the image to Twitter, writing: “I took this photo as we were leaving #NotreDame about an hour before it caught on fire. I almost went up to the dad and asked if he wanted it. Now I wish I had. Twitter if you have any magic, help him find this.”

I took this photo as we were leaving #NotreDame about an hour before it caught on fire. I almost went up to the dad and asked if he wanted it. Now I wish I had. Twitter if you have any magic, help him find this 🙏🏼 pic.twitter.com/pEu33ubqCK

Windsor’s initial tweet has been shared more than 220,000 times and liked by nearly 500,000 Twitter users since it was shared earlier this week.

In an update Tuesday, she said the father-daughter duo had been found. She wrote: “The search is over! The photo has reached the dad & family. He has chosen to remain anonymous in the wake of tragedy, and writes: ‘Thanks again for that beautiful photo, we will find a special place for it.’ Thank you to everyone who has shared the picture and for your kind words.”

The historic building, visited by millions of travellers each year, housed some of the world’s most prized relics, including Jesus Christ’s Crown of Thorns. According to a spokesperson for the cathedral the fire broke out at around 4.50pm on Monday afternoon (French local time), The Guardian reports.