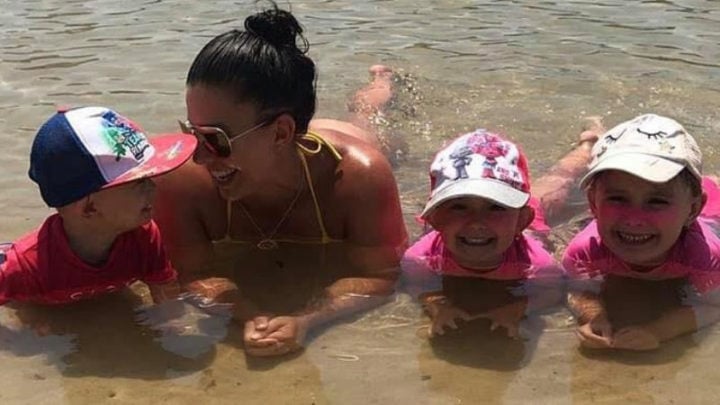 Hundreds of mourners paid their respects to Hannah and her three children in Brisbane on Monday. Source: Facebook.

Hundreds of mourners turned out in Brisbane on Monday morning to farewell Hannah Clarke and her three young children, almost three weeks after they were killed by Hannah’s estranged husband Rowan Baxter.

The mother is set to be laid to rest alongside Aaliyah, 6, Laianah, 4 and Trey 3 in a single white coffin, and celebrant Fiona Cunningham told the congregation that “as in life, they continue to be together”, according to the AAP.

The moving service was live streamed by several news outlets, including 7News, as Hannah’s family allowed cameras to be admitted into the Citipointe church in the suburb of Carindale.

Hannah’s brother Nathaniel also delivered an emotional eulogy, in which he described his sister as “one of the greatest mums to walk this earth”.

“You were smart, beautiful and caring. I loved you from the day I was born,” he said. “And I finally got to see who was offering me all those cups of tea while I was in my mum’s tummy.

“We were always there for each other. You were there to take me to hospital when I broke my arm … And I was there to catch you when you fell off the trampoline. We had the type of bond that parents want for their kids.”

He added: “You were so amazing Han, it’s no wonder that your kids were just the same.”

The funeral service for Hannah Clarke and her children Laianah, Aaliyah and Trey. The service takes place nearly three weeks after they were killed in a domestic violence attack that shocked the nation. https://t.co/d1kayOpKn1 https://t.co/fv3hGSr3Bh

Two of Hannah’s friends, Lou Farmer and Nikki Brooks, also spoke during the service. Lou said: “Everyone who met Hannah knew she was something special. That smile drew you in. She made people feel important and lit up every room she was in. From the moment I met her I was blown away by her positivity and zest for life.”

Childhood friend Nikki described Hannah as the “yin to her yang” and said she was “the kind of person you need in your corner and want in your life”.

Prime Minister Scott Morrison and Queensland Premier Annastacia Palaszczuk also attended the service, and the Liberal leader followed the wishes of Hannah’s family by opting to wear a pink tie as he paid his respects.

Hannah and her three young kids were killed in an horrific car fire on February 19 as they left her parent’s house in Camp Hill to make their way to school. However Hannah was then ambushed by her estranged husband Rowan Baxter who set the vehicle alight, before fatally stabbing himself at the scene on Raven Street.

The 31-year-old mother was rushed to hospital from the scene after managing to climb out of the vehicle, however she sadly succumbed to her extensive injuries later the same day.

After the tragic deaths, Hannah’s family spoke out to reveal the abuse that her daughter had endured throughout her marriage to the former NRL player and they have since set up a foundation in her memory.