Family of great-gran, 93, facing deportation to UK warn ‘journey will kill her’ 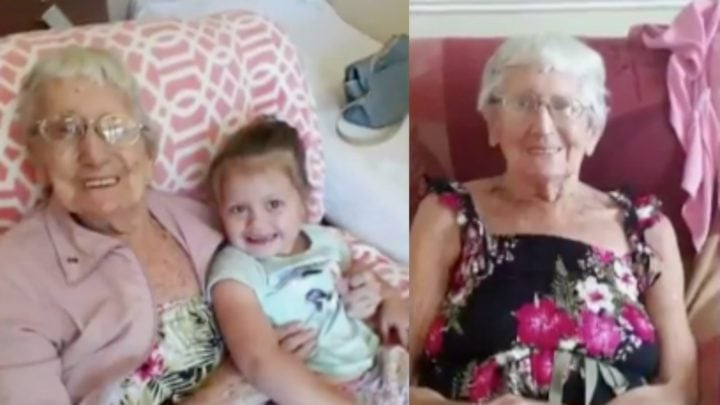 Great-grandmother Mollie Manley is facing deportation to the UK after failing to meet health requirements for a permanent visa. Source: Twitter/ The Today Show

A 93-year-old great-grandmother could be deported back to the United Kingdom, where she would spend her final years alone, after failing to meet stringent visa requirements due to her depleting health.

Mollie Manley’s family are begging authorities to allow her to remain in Perth, where she has lived for the past 11 years, warning the long journey back to England could kill the matriarch, according to SBS News.

“At her age, any plane journey will kill her, are you happy to weather the fall out that will cause?” her son-in-law Robert Rowe wrote, in a letter sent to the Home Affairs department last month.

Robert has now appeared on the Today show, along with Mollie’s granddaughter Lauren Oliver, to discuss the story, explaining that his mother-in-law had been in good health when she first arrived in Australia over a decade ago. Mollie was granted a temporary visa at the time while she waited for her aged parent visa to come through.

The Aged Parent visa is granted to those who are old enough to receive the Age Pension and have at least half of their adult children living in Australia. It is classed as a permanent visa, giving approved applicants the rights to live in Australia permanently. However, according to the Department of Home Affairs it can be a long process, with wait times of up to 30 years.

Now after 11 years in the country, where she has settled close to her three grandkids and nine great-grandchildren, the family has been informed that Mollie no longer fulfils the health requirements for the visa due to her blindness and could be forced to return to her home country.

After spending 11 years in Australia with her family, a 93-year-old grandmother could be deported back to the UK because she’s considered a burden on our health system. Mollie has no family in Britain, surely we need to show some compassion? #9Today pic.twitter.com/WwdDCWUT7G

Robert told host Deb Knight and Tom Steinfort that Mollie has no family left in the UK, with the majority of her loved ones having moved Down Under.

“She has no family in the UK whatsoever,” he said. “Her husband died in the 1980s and she was just living alone in the UK. If she goes back she’ll have no family support unless we sell up and take her back back ourselves and give her that support.”

Lauren then revealed that the family have not yet told Mollie about the possibility she may have to move back to the UK, claiming it will be “heartbreaking” for the loving grandmother.

“It’s really worrying, it’s really quite distressful,” she said. “She wants to be around us, we are it for her. She loves us, she loves the kids and the great grandkids. I feel really sad at the prospect that she could die alone.”

Lauren added: “We haven’t been able to tell her. I don’t know what it would do to her. It would be heartbreaking.”

The family is now calling on the government to show some compassion and allow Mollie to stay in the place where she is surrounded by a loving family. Robert claimed while it has been argued that the grandmother will be a “burden” on the system due to her health, Mollie doesn’t have many years left in her anyway.

“She’s 93, it’s unlikely she’s going to live in her present state for very long,” he explained. “The burden on the state is going to be quite small over all. It’s not like they are going to have to support her over her lifetime.”

The son-in-law added: “And of course we have at least eight members of her extended family all working and paying tax every week to the government and really we’re just asking them to show a bit of compassion and allow her to stay.”

Unfortunately for the family the chances of Mollie staying in Australia are looking bleak with the grandmother’s migration agent Andrew Kurowski telling SBS News it’s likely the visa would be refused.

While Mollie will be given the opportunity to appeal any decision through the Administrative Appeals Tribunal, Kurowski told the news outlet there is sadly little chance the outcome would change. He said: “The next step would be ministerial intervention, and this, if she’s still alive, I would think probably succeed because it would be unconscionable to deport her.”

A spokesperson from the Department of Home Affairs said: “The Department does not comment on individual cases, and will not pre-empt a decision by the Departmental delegate or a Ministerial Intervention decision.

“Individuals may remain in Australia while their case is being considered.”

Have you been following this story? Do you think Mollie should be allowed to stay in Australia?