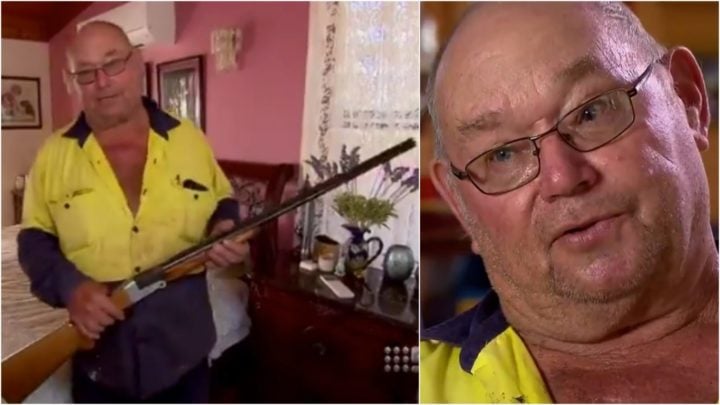 Henry Spierenburg and his wife Sue were threatened with a knife in a brutal home invasion. Source: 9 Now/ A Current Affair

A Queensland couple have been forced to sleep with a gun beside their bed for protection after being targeted in a brutal home invasion which has left them fearing for their lives.

Grandfather Henry Spierenburg and his wife Sue were tied up and threatened with a knife in an attack at their property in Mount Cotton, south of Brisbane, recently.

In a chat with Channel Nine’s A Current Affair, a terrified Henry explained he thought the was going to get his throat cut after the intruders smashed their way into his home and ordered him to open a safe containing the couple’s hard-earned cash and jewellery.

“I thought I was going to get my throat cut,” the 70-year-old told reporter Dan Nolan during the segment which aired on Thursday night.

The terrifying event has left the couple traumatised with the grandad now keeping a gun close by in case of further intrusions. When asked what he will do with the weapon if another person storms into his home, Henry admitted he wouldn’t think twice about using it.

“Blow someone’s head off if they come up the stairs with a knife and baseball bat at me… there would be no warning shot, boom,” he said.

Henry and Sue don’t want to sleep next to a loaded gun… But they say they have no choice. #9ACA | FULL STORY: https://t.co/qCvjqX5DeC pic.twitter.com/YW94hCBWHX

While it may seem like a great plan in the eyes of Henry, former police detective turned Bond University criminologist Terry Goldsworthy said there would be consequences to pay if shots were fired.

“Anywhere where there is an application of lethal force that results in a homicide you need to be able to show there was authorised, justified or excuse by law and if you can’t do that then you will be charged with murder or manslaughter,” he explained on last night’s episode of A Current Affair.

Sadly for Henry and Sue only one of the thieves who targeted the couple was caught and, despite the terror inflicted on the grandparents, he was handed a four year suspended sentence and spent just 11 months behind bars.

“If something like that happened to the judge and (the home invader) held a knife at his missus’ throat would he have got the same sentence?” he questioned on the program. “You know, it’s a joke, the law is a joke, the police risk their lives every day of the week catching these mongrels then the law lets them go with a sentence like that.”

The grandad added: “Don’t come running up my stairs in the middle of the night, go and get a job you mongrels.”

Have you ever been targeted in a home invasion? Did you watch A Current Affair last night?