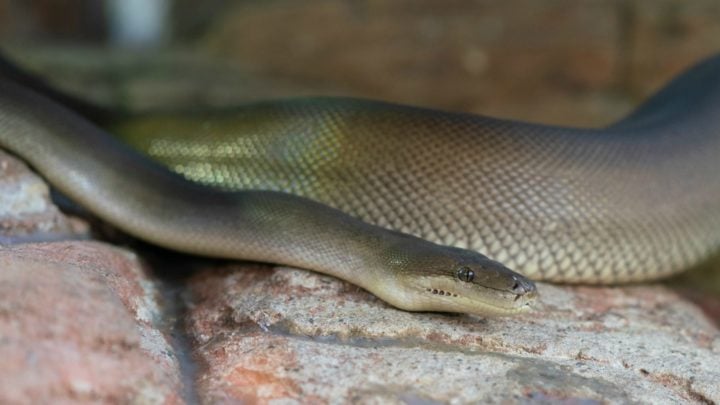 The olive python is one of Australia's largest snakes. Source: Getty.

It’s no secret that Australia has a reputation for being home to many of the world’s scariest animals. And now a photo has emerged of a python that may make your skin crawl if you have a fear of snakes.

A woman was given the fright of her life over the weekend after she found a cat being eaten by a large olive python in front of her home in Katherine, Northern Territory on Saturday.

In a post on Facebook, Beck White thanked David Reed from Reedy’s Reptile for removing the snake, adding it was quite distressing.

“Thanks for coming out so quick this morning it was quite distressing knowing that the big olive python had eaten a cat,” she wrote on Facebook. “It so easily could have been our much-loved family pet. So when I say Reddy saved our family’s life, it’s 100 per cent.”

Speaking to the Sunshine Coast Daily after the incident, she said, “By the huge bulge in his stomach you could tell he [the snake] was stuffed — I think he was taking a nap when I found him.”

The news comes a few months after a 68-year-old man died after being bitten by a snake on a camping trip in the Northern Territory. The man had been camping in Garig Gunak Barlu National Park, in the state’s north, when he was attacked by the western brown snake.

With temperatures around Australia soaring, plenty of snakes have been emerging from their hibernation to hunt for food.

Coming across a snake in your backyard or house can be quite confronting. A quick search online will reveal products that have been specifically formulated to repel snakes, and there are even some ‘home remedies’ involving the strategic placement of mothballs or ammonia around your house to keep snakes at bay. However, professional snake catchers and handlers say you shouldn’t be too surprised if they don’t work.

The chances of a snake slithering across your path at home depends on a number of factors, including your location, the surrounding landscape, the presence of water and the design and maintenance of your lawn and garden.

The best advice Starts at 60 has been given when it comes to snakes is to just leave them alone. Chances are they will move on without causing you any trouble. Of course, if one does enter your home the recommended advice is to keep an eye on it and if you feel threatened by it, call an expert.