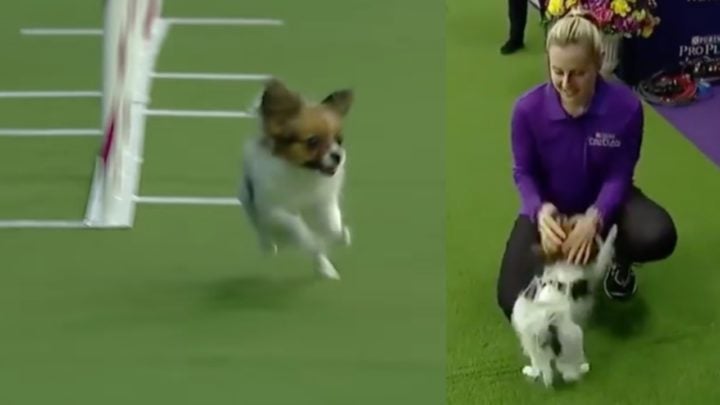 Gabby the Papillion blitzed the course at the Westminster Kennel Club Dog Show with an impressive time of 39.31 seconds. Source: YouTube/ Fox Sports

A tiny dog has won hearts and been likened to Olympic sprinter Usain Bolt for her incredible speed and agility in an international dog show.

Gabby the Papillion proved even the smallest of furry friends can come out on top with her teeny legs carrying her through the final round of agility division at the Westminster Kennel Club Dog Show on Sunday with ease.

Smashing the second place time, the three-year-old’s performance could easily be missed in the blink of an eye as she ducked and weaved through the course like a dog chasing a bone.

Looking as cute as ever with her big fluffy ears and tail, Gabby sped along a balance beam, through tunnels and over hurdles like a true performer.

Following her handler Andrea Samuels’ lead the adorable pooch didn’t stop for a moment, running as if her life depended on it until the very last hurdle.

Clearly proud of herself and excited by the rousing applause of the crowd, the fluffy canine finally took a moment to breathe once finished, celebrating with Andrea, with high-fives.

It comes at no surprise that little Gabby claimed the first place position for the 8-inch division, finishing the course in a highly impressive 39.31 seconds. Despite her band of fans Gabby sadly didn’t receive the championship’s top prize, with that award going to a Border Collie by the name of Verb.

The talented dog won both his division and title of Master Agility Champion completing the course in just 32.05 seconds in the final round.

However, that hasn’t dampened little Gabby’s spirits with the Papillion gaining a massive following online as videos of her incredible performance strewn across social media.

Fans have praised the pooch for her unbelievable speed, shocked by how fast her little legs managed to carry her.

I know nothing about this but if this isn’t a world record time I wanna know what is pic.twitter.com/bSKp1BasR5

“I know nothing about this but if this isn’t a world record time I wanna [sic] know what is,” one person on Twitter exclaimed.

“I love how the trainer can barely keep up. I think Usain Bolt could barely keep up with that little furry laser,” another commented.

While a third joked: “When it bends through the poles, that’s me sprinting through people to get to the cake table first”.

Meanwhile a cute Bichon Frise has also gained some attention, but certainly not for the same reasons as Gabby. Little Winky seemed not too fazed by the competition, treating it like a casual walk in the park rather than a high-stakes race.

Strolling through the course the fluffy pup even stopped to pose at the top of a balance beam, looking around as if waiting for an applause from the crowd.

He did manage to finish the course but it took 100.01 seconds and he racked up a whopping 92 faults. But he has gained himself a big fan base.

“Oh heck yeah Winky, you strike that pose and acknowledge your fans, you king,” one person wrote on Twitter.

Another added: “Winky it’s not how fast you go it’s how well you finish! Love the pose!”

Do you like watching dog shows? What is your favourite dog breed?