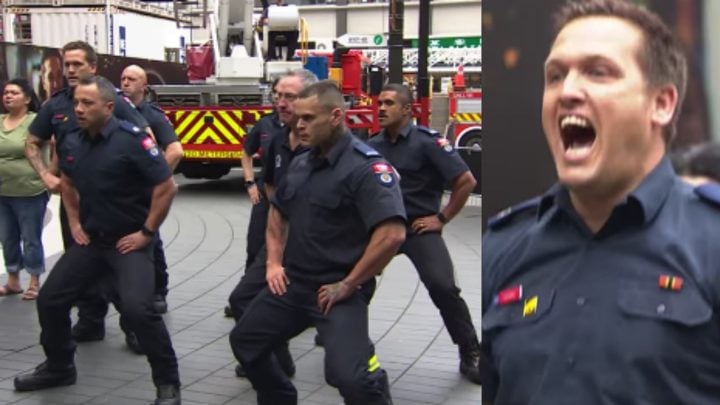 A group of firefighters performed an emotional haka. Source: Facebook/Fire and Emergency NZ.

The powerful moment a group of New Zealand firefighters stopped a busy street as they performed a haka in memory of the first responders who lost their lives in the 9/11 tragedy has been caught on camera – and is quickly becoming an internet sensation.

Incredible footage shows the men performing in front of the Sky Tower in Auckland on Wednesday, pulling off an amazing ancient war dance in memory of those who died in the horrific September 11 terrorist attacks. While they all perform in matching uniform, more firefighters can be seen opposite them in full overcoats and helmets to mark the occasion.

Following the performance, more than 200 firefighters climbed the stairs of the tower for the incredible tribute, Fire and Emergency NZ confirmed in a Facebook post.

Praise for the firefighters’ respectful display also poured in on social media, with one person writing: “Thank you from the bottom of our hearts New Zealand.” Another user said: “I always choke up watching the haka. This moved me far more than anything our dotard POTUS has said in tribute for 9/11.”

While a third commented: “I got chills watching this. Very touching tribute. Thank you New Zealand.” And another person wrote on Twitter: “THESE are brave, strong, honorable law enforcement officers who helped to achieve #GunReformNow in their nation after just one mass shooting. THESE are warriors who protect their communities & honor #American #FirstResponders who made the ultimate sacrifice.”

The haka is a traditional war cry or challenge in Māori culture, but in modern times it’s also performed on meaningful occasions. It’s one of the highest honours in Māori culture. According to New Zealand’s rugby team the All Blacks’ official website, the most performed Haka is called ‘Ka mate, Ka mate’, which was composed by Ngati Toa Chieftain Te Rauparaha around 1820.

“Many sports teams and individuals travelling from New Zealand overseas tend to have the haka ‘Ka mate’ as part of their programme. The sports team that has given the haka the greatest exposure overseas has been the All Blacks, who perform it before their matches. It has become a distinctive feature of the All Blacks,” the description reads.

It comes after communities across New Zealand and the world came together following the Christchurch mosque attacks that left 50 people dead earlier this year. And in one of the most powerful tributes to date, students from Christchurch Girls’ High School and Christchurch Boys’ High School joined forces to show their support for the victims and their families of the deadly attacks.

A clip shared on Facebook by photographer Rami Bahaeldin showed students from Christchurch Girls’ High School performing a traditional song on Hagley College in Christchurch city. One member of the Muslim community could be seen hugging one of the girls, clearly moved by the performance.

Students from Christchurch Boys’ High School then performed the haka in a part of the city that has become a place for families and locals to pray and grieve together.

Following the haka, the students could be seen hugging members of the Muslim community, who were visibly touched by the performance. At one point, one student was so overwhelmed with emotion that he begun to cry.

It followed a haka performance by members of the Black Power gang, one of New Zealand’s largest Maori groups days before. The gang gathered outside Al Noor Mosque in Christchurch to perform the powerful tribute to mourners.

Have you seen a haka? How did you react seeing the moving performance?