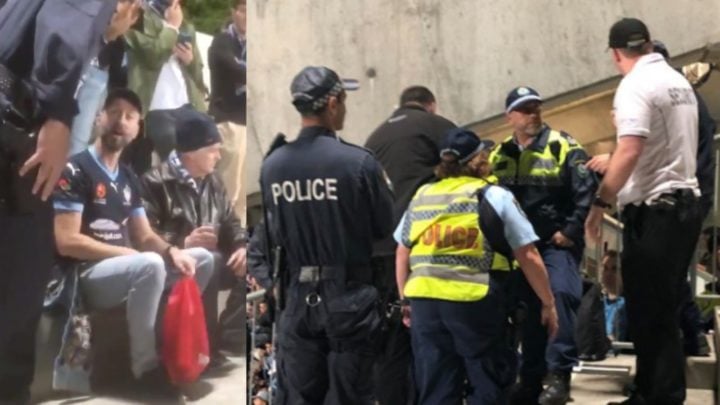 A father has slammed the police for "evicting" himself and his family from a soccer match at the weekend. Source: Twitter/ Tom Miles and Twitter/ Rory Carroll

An angry father has slammed the police over their treatment of his family after they were allegedly kicked out of a soccer game at the weekend.

Rory Carroll took to social media to vent his frustration, claiming his daughters were reduced to tears by the actions of the NSW Police during an A-League game between Sydney FC and Melbourne Victory on Sunday night.

The sports fan said he was asked to leave the Kogarah Jubilee Stadium in Sydney after he tried to take his disabled daughter to a nearby toilet which was located in a restricted area.

Footage of the heated exchange was shared online showing Rory arguing with police and security as they attempted to escort him from the premises.

“Are you serious,” he can be heard asking police in the video

“The disabled toilets – because my daughter needs it – are right there and they won’t let me take my daughter through. That’s what this is all about.”

Rory can then be seen pointing at a security guard, adding: “You guys want to kick me out because he said so and I can’t take my disabled daughter five metres.”

Taking to social media following the incident the disgruntled dad explained how a night that started with excitement soon ended in tears.

“I was pumped for the game tonight,” he wrote on Twitter. “Taking the kids out on Mother’s Day and on a school night ahead of the NAPLAN this week. My daughter had not stopped talking about it and got dressed into her SFC gear after she finished her game this morning. Unfortunately that’s not how our night ended. I had to console crying girls and put up with multiple police cars monitoring my movements as we exited the stadium.”

Rory continued by detailing the events of the night, lashing out at police and security.

It seems it’s a question of getting people like me out of the game. pic.twitter.com/uvo95nX3yF

“Enough is enough,” he wrote. “Our stadium tonight was filled with first time security guards, some clearly on power trips. The issues always start with security setting themselves against fans.

“Myself and my family were surrounded by a phalanx of armed police with officers holding their hands to gun holsters.”

He added: “The question I must now ask myself is why bother taking my family to our stadiums?”

The father also shared a photo from the evening event of police and security surrounding himself and his family at the stadium. Rory added further detail to the incident noting how they apparently behaved on the night.

“Bearded cop with the fluoro screamed at me in front of my children,” he wrote alongside the image. “When I asked a question he said I was being argumentative.

“Overweight man in white ordered me out. His security guard had earlier assaulted me. Female police sargent [sic] in white was more understanding.”

Taking this photo set an eviction into process. This is the problem with our stadiums. The people in that photo don’t want fans to attend. https://t.co/E4b4jX16ES

Speaking about the incident a NSW Police spokesman confirmed that a man was escorted from the premises on Sunday night after he refused to cooperate with “seating protocols”.

“During an A-League game held at Jubilee Oval, Kogarah this evening, a male spectator was spoken to by security about seating protocols,” they said.

“Despite repeated requests by security the man was unwilling to cooperate, police assistance was called, the man was spoken to by officers, and after further refusal was escorted from the stadium with his family.”

Frustrated members of the public have since added their thoughts to the incident with the majority claiming it was completely wrong for the family to be escorted out.

“Absolutely lost for words on the treatment you received but unfortunately I’m not surprised as this happens time and time again,” one person wrote on Twitter to Rory.

“What a disgraceful and bizarre incident. Sorry for you and your family. I hope this terrible outcome for Sydney can trigger a culture shift,” another commented.

While a third added: “So disappointed and outraged by what happened last night Rory. Hope your kids are doing well mate and remember we are all on your side.”

What are your thoughts on the incident? Do you think the police were in the right to escort the man and his family out?