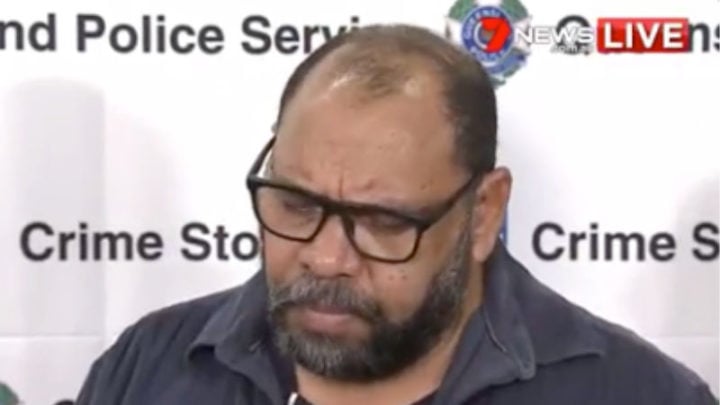 The heartbroken family of a toddler who tragically passed away after allegedly being left on a childcare minibus for several hours have broken their silence.

Speaking outside of Cairns Police Station earlier today, the young boy’s uncle Nick delivered a heartfelt statement on behalf of the family as he revealed they are trying to come to terms with the sudden loss of the three-year-old.

Nick, who was accompanied at the press conference by three other adults, refused to name the deceased youngster due to cultural reasons and said the family are now in ‘Sorry Business’, which is the term used to describe the period of mourning following the death of an Aboriginal or Torres Strait Islander person.

“The sudden loss of our little boy has been distressing for the family. It’s left many of us with the difficult task of trying to come to terms with his loss,” Nick said.

“He was a three-year-old boy who was deeply connected to his siblings, his peers and older children. He played a big part in a very close knit family. At present our families are working through a very different time sin our lives by supporting, encouraging and looking out for each other.”

Nick went on to say that the incident has not only affected the boy’s family, but also the wider community, and thanked members of the public, along with Queensland Police, for their “help, love and their prayers”.

The family of a three-year-old boy, who died on a childcare bus in North Queensland, is speaking in Cairns. #7NEWS https://t.co/fWcTqiqTxm

The young boy was found dead in the back of the minibus last Tuesday and had allegedly been left alone onboard the bus, strapped into a baby seat, for a total of six hours as the outside temperature rose as high as 36 degrees celsius.

It was only when Edmonton Goodstart Early Learning Centre director Michael Glenn Lewis returned to the bus that afternoon, that the boy’s body was found.

Lewis has since been charged with one count of manslaughter in relation to the incident, along with childcare worker Dionne Grills, and the pair fronted Cairns Magistrates Court on Tuesday.

Police will allege that Lewis has fraudulently signed the boy into the daycare centre at around 7.35am on the morning of February 18. It will also form part of the police’s case that Lewis had been using the fraudulent sign-in method as a way of collecting taxpayer-funded benefits.

The child’s mother is then thought to have called the centre to request that her son be picked up, prompting Lewis and Grills to collect the boy at 9.15am. The court heard that the minibus arrived back at the centre at approximately 9.33am, however neither of the co-accused removed the boy from the vehicle.