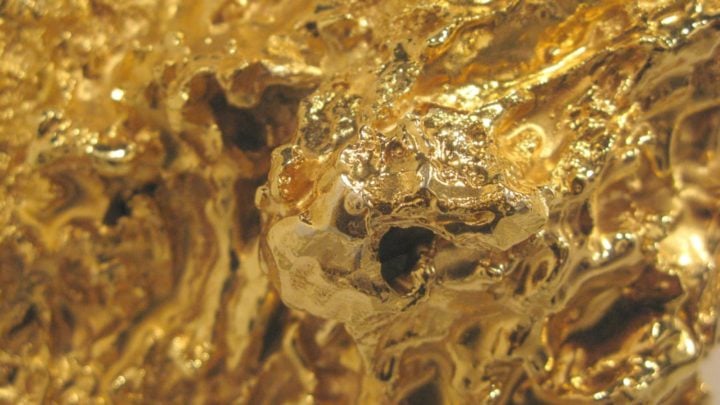 A father and his daughters stumbled upon the gold nugget while out walking their dog. Source: Getty, stock image used.

A morning stroll with the dog has left one lucky family tens of thousands of dollars richer after they stumbled upon an impressive lump of gold.

A father and his daughters were walking their dog Lucky near their hometown of Bendigo in Victoria when they discovered the 20-ounce nugget, thought to be worth more than $35,000, The Bendigo Advertiser reports.

According to the news outlet, the father didn’t notice the gold at first, but one of his daughters spotted it as they walked past.

“I actually walked right past it but my daughter pretty much kicked it as she was walking,” he told The Bendigo Advertiser. “She then goes, ‘Dad, is this gold?’ I said, ‘I think it might be’.”

Surprised with the find, he said they then took it to the nearby supermarket to weigh it, with the scale reading 624g or 20 ounces. The nugget has since been taken to an expert who confirmed it is a gold nugget and reportedly told them they could receive more than $35,000 for it.

This was welcome news for the family who, according to the dad, have faced some difficult times recently.

“We’ve come on some tough times so it’s really good because we’ve been struggling financially,” he told The Bendigo Advertiser. “It couldn’t be better timing really.”

While the nugget may have been a one off find, the father said they will be going back to the area to look for more just in case there is something else lying around.

The Victorian family aren’t the only ones who have been gifted with a bit of good luck, with an Aussie couple last year discovering a hidden treasure in their own home.

Popular presenter Tim Wonnacott, who is known famously for his previous role on Bargain Hunt, recalled the moment his team handed the good news to the Australians while filming the series Antiques Walkabout in the Land Down Under.

Have you ever made an exciting treasure discovery? What would you do if you found a gold nugget?