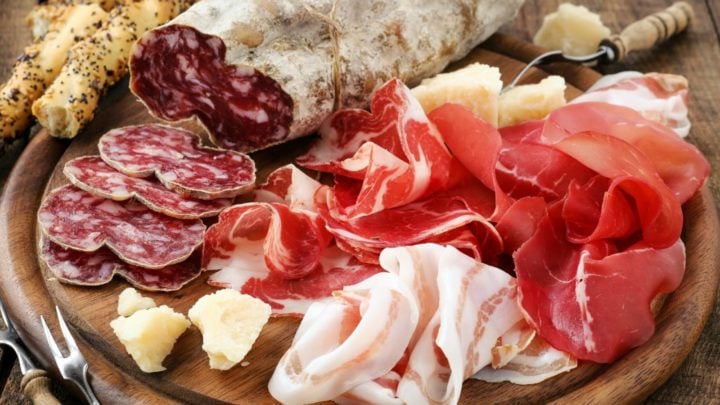 If the trade deal is successful hundreds of popular products including salami, prosciutto and other processed meats would need to be renamed. Source: Getty

Australians have been making mozzarella, feta and scotch steaks for years, but some food and drink products may need to be renamed under new changes proposed by the European Union as part of a trade deal — known as geographical indications (GIs) — which are aimed at protecting EU products associated with a distinct European region.

The Morrison government has today released a list of 172 foods and 236 drinks the EU wants banned in return for a free trade agreement (FTA) with Australia. If the trade deal is successful hundreds of popular products including feta, gruyere and scotch beef would need to be renamed. Packaging may also need to be changed for some products.

Trade Minister Simon Birmingham announced on Tuesday the Australian government will spend the next three months consulting with the farmers and businesses likely to be impacted by the proposed changes.

“The EU boasts more than 500 million consumers and, even with existing trade restrictions, it is already Australia’s third largest export market. Whilst we understand the importance the EU places on geographical indications, our priority is ensuring our farmers and businesses can get better market access and be more competitive in the EU.”

He continued: “This consultation process will help us better understand the views of Australian industry, which will assist us in our ongoing discussions with the EU on why their requested protection of certain terms will not be acceptable in some cases.”

Birmingham said the government will put up a strong fight “to achieve an overall agreement that delivers more opportunity for Australian farmers and businesses”, adding that the FTA deal would only go through if overall it’s in Australia’s interests to do so.

The EU is Australia’s second-largest trading partner, third-largest export destination, and second largest services export market, and wines are already protected under a wine trade agreement between Australia and the EU.

It’s not the first time Aussie manufacturers have been faced with issues over naming rights though as, in 2017 New Zealand honey producers applied to exclusively trademark the name ‘manuka’ in big markets including the US, the UK and China. They argue that manuka is a Maori word and Australian producers are being opportunistic in trying to cash in on the success that Kiwi producers enjoyed by marketing it.

Meanwhile, other well-known products with geographically protected names include Champagne, which is from the Champagne province of France, Parma ham, which is made in the Italian city of Parma and Cornish pasties, which can only be associated with Cornwall in the United Kingdom.

What are your thoughts on this? Do you agree that geographical restrictions like those imposed by the EU should apply?