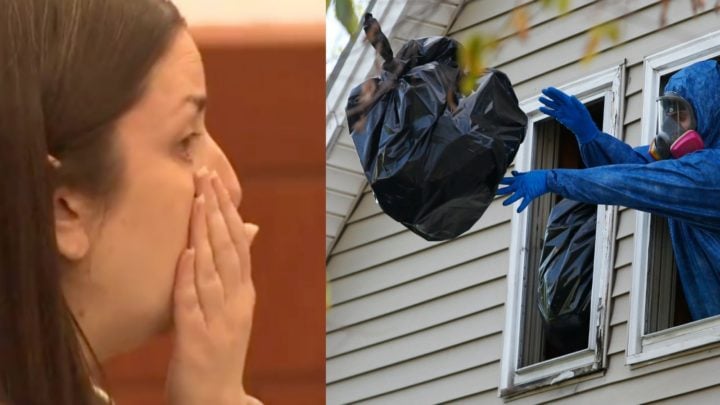 Mother Erika Murray, who is charged with the murder of her two babies, struggled to contain her emotions during a court appearance after seeing photos of her children. who were discovered in her maggot infested home. Source: Twitter/ Todd Kazakiewich and Getty

A mother, charged with the murder of two of her babies who were found dead along with a foetus in her maggot-infested home, has broken down in tears during a court appearance after being shown photographs of her children.

Erika Murray was captured struggling to contain her emotions during the double murder trial which has been likened to the chilling house of horrors case in California, The Daily Mail reports.

According to the publication the two babies were discovered by police back in 2014 under piles of rubbish, while the foetus lay hidden in a cupboard in the “filthy” house which was reportedly filled with dirty nappies, fleas and maggots.

The mother was charged with the murder of two of the three babies while her four living children, ranging in age from five months to 13-years-old, were removed from the home.

A rare display of emotion from Erika Murray – tearing up as photos of her children were shown this morning during her double murder trial. #wcvb pic.twitter.com/L1vJ0QcsPD

Speaking about the disgusting conditions neighbour Betsy Brown reportedly told the court the family were living in squalid conditions with rubbish strewn right through the house.

“Horrible rotting food. Dirty diapers, lots of dirty diapers, baby bottles, maggots everywhere. It was really dark and hot. It was horrible,” she said according to The Daily Mail.

Betsy added: “Just everywhere you looked there was filth on the walls. There were little handprints, baby handprints and faeces.”

According to The Mirror the living children were discovered in terrible conditions with the three-year-old unable to walk or talk while the six-month-old baby was completely covered in faeces.

Meanwhile social worker Walter McClain added in court according to The Daily Mail: “You couldn’t tell the colour of this child, because there was so much filth on her.”

However, according to the publication Murray has pled not guilty to the murder of her children with her defence attorney claiming there is no evidence she committed a crime.

Keith Halpern reportedly said in court that the mother, who apparently suffers mental health issues, did not call authorities after the death of her children as she panicked.

But prosecutor Christopher Hodgens claimed according to The Daily Mail that Murray’s neglect of the home and her children was the cause of the babies deaths.

“Erika Murray needlessly allowed her children to suffer in that home and that Erika Murray caused the death of two of those babies,” he said according to the publication.

The judge is yet to reach a verdict.