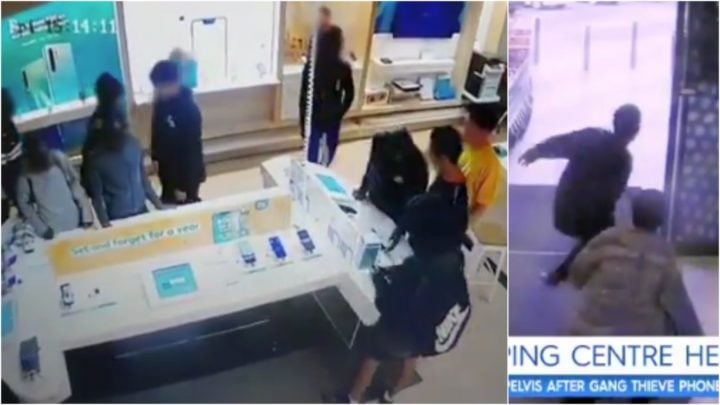 Police are appealing for information relating to the incident in Casula, NSW. Source: Twitter/Today.

An elderly woman has been left with a fractured pelvis after being knocked unconscious following a run-in with a gang of teenage thieves, as the crooks fled the scene having committed a robbery in Sydney’s south west.

Police are appealing for information in relation to the shocking incident, which saw the 81-year-old woman hospitalised after a group of teens carried out a distraction-style robbery at the Optus store in Casula, NSW.

CCTV footage of the incident has been released and shared widely online, as cops attempt to track down those responsible after they stole a watch and a mobile phone – which they later dropped – from the mobile phone store.

The incident, which took place just after 3pm last Friday, also featured on Channel Nine’s A Current Affair on Tuesday night as police work to trace the culprits.

CONFRONTING: An 81-year-old woman has been left with a broken pelvis after a group of teenage thieves knocked her over as they fled the scene. #9Today pic.twitter.com/0AeD5SWQa6

The teenagers entered the Optus store and began pulling on items that were securely attached to a display table, causing staff to ask the group to leave the store. However, as seen in the footage, the group ignored the requests and continued to cause a disturbance.

Eventually, they were removed from the store, however police revealed that one male teen hung back and stole a watch, while another teenage boy made off with a mobile phone, which he then dropped as he fled the scene.

The shocking footage then shows the second teen knocking the elderly victim to the ground as he makes his way out of the shopping centre, and she can be seen stumbling to the right before falling to the floor, with police confirming that the blow left her unconscious.

Police were called to the scene and the woman was treated by paramedics before being transported to hospital, where she is currently undergoing treatment for her injuries.

What are your thoughts on this story? Have you ever been witness to a crime?