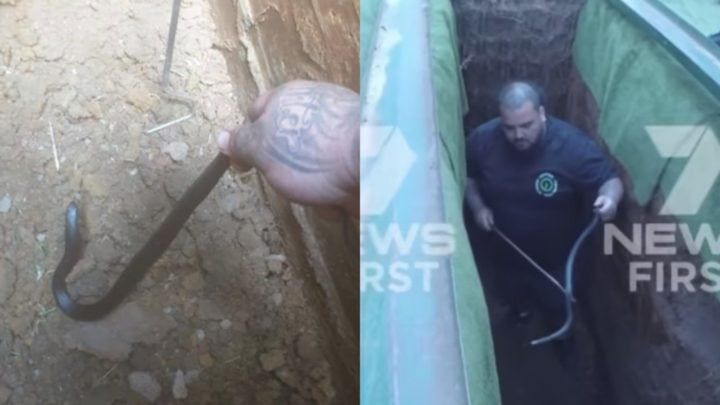 A Sydney snake catcher was called to pull the reptile from inside the open grave. Source: Facebook/Reptile Relocation Sydney (left) and Sunrise (right).

Mourners were forced to watch in shock as a snake catcher was called mid-way through their loved one’s funeral to pull a deadly reptile out from an open grave in front of them.

The service at Leppington Cemetery, south-west of Sydney, was stalled briefly while Cory Kerewaro from Reptile Relocation Sydney used a step ladder to descend down into the grave, before pulling out a red-bellied black snake. Mourners could be seen standing around the edge watching the drama unfold, before they were able to continue their service.

Sharing photos from the day, Cory revealed the moment he stepped down under the ground, before holding up the snake to the camera for all to see. He even captured a close-up photo of the slithery creature in amongst the recently upturned soil. He has since told the Daily Mail the casket was actually already being lowered before someone spotted the snake below it.

“I received a phone call from the funeral saying there was a snake,” he told the news outlet. “They were in a service and they had already began lowering the casket but had to pull it back up.”

While he explained he initially tried to capture the snake from the ground, he was eventually forced to step down into the grave himself to catch it. He admitted: “It certainly held the service up for a little bit.”

Network Seven has since aired video footage of the moment on morning show Sunrise, and viewers shared their shock as they watched the event unfold. One wrote: “The poor family. Sometime down the track, I hope that they can have a laugh about it,” while another added: “I’m a snake lover. If this happened at my funeral I’d be there watching and probably laughing at the reactions.”

And it comes just weeks after a monster red-bellied black snake was captured in Queensland. Groundskeeper Bryce Lockett, from Snake Catchers Brisbane, posed for a photo at Belmont shooting range near Brisbane as he held up the huge reptile on the company’s official Facebook page. Its head appeared disproportionately huge as it rose up to the lens and, within hours, the post garnered thousands of comments from impressed and terrified Aussies alike.

Some couldn’t hide their excitement as one person wrote: “Omg my favourite snake. What a beautiful beautiful snake !!” while another added: “Oh how beautiful!!! Such lovely lil snakes.” One more added: “Beautiful critter so healthy thick an shiney (sic).”

However others weren’t so sure with one joking: “A bit too close to Carindale for my liking!!!!” while another added: “F*** that’s gotta be the biggest one of those that I’ve seen.” Another added: “I got cornered in a semi-outdoor toilet by one of these when I was a pre-schooler. No-one believed me !”

Speaking to the Daily Mail Australia about the find, Lockett admitted the snake was “abnormally large” for its type and added: “A lot of the red bellies were not surviving to this size because of cane toads, but he has been dodging them and gotten to a decent size.”

Meanwhile Gold Coast snake catcher Tony Harrison warned the news outlet that the upcoming summer months would see more snakes invading Aussie homes as it starts to heat up outside. “You’ll get them everywhere,” he said. “When temperatures drop below 23C, you don’t see a lot of them, they slow right down.”

Have you ever come face to face with a red-bellied black snake?