‘It changed me’: Veterans share D-Day memories on 75th anniversary 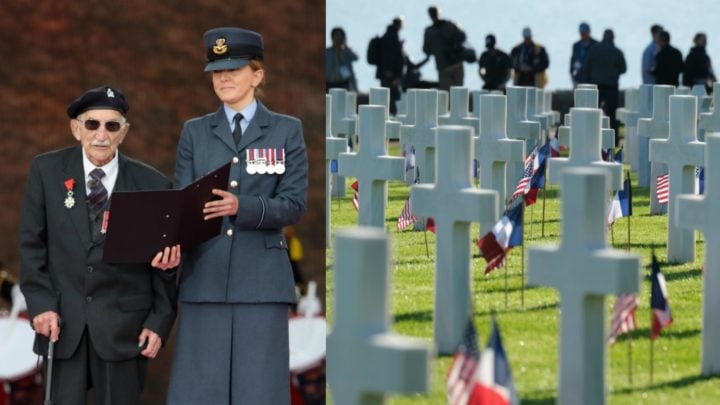 Veteran John Jenkins was one of many who took part in a special ceremony this week marking 75 years since D-Day. Source: Getty

Brave soldiers who fought for their countries during World War II came together on Thursday for a special D-Day commemoration ceremony marking 75 years since allied forces launched a combined assault on Nazi-occupied France.

On June 6, 1944, naval, air and land troops joined together to attack the forces on the coast of France in the region of Normandy in a mission named Operation Overlord.

Around 156,000 allied forces arrived in the European country, fighting against German forces in hopes of finally putting an end to the war that had been raging since 1939. Battling in tough conditions, the soldiers put their lives at risk to defeat Nazi Germany and after 11 months their goal was met.

Though the years have passed, the memories still remain for the veterans who sacrificed their lives to create a better future for others. Thursday marked a special moment for all who were involved in D-Day, with many taking the time to reflect on the hardships faced and the friends lost in battle.

American veteran Jack Ewald was one of many to take part in a special ceremony this year in Normandy alongside his fellow soldiers.

Speaking to The Telegraph, the brave 94-year-old thought back to the day he landed in France and the atrocious conditions faced. However, despite the hardships which occurred, Ewald claimed he is no hero.

“We didn’t do anything special,” he told the publication. “We all protected each other. We knew we had to do it and we did it. There weren’t no hero business about it.”

Private First Class Warren Goss also made the trip to France to mark the anniversary. He was part of one of the first waves of soldiers to land on nearby Utah beach after three years at sea.

“Most people were seasick. We could hardly see land. The Germans could see us but we couldn’t see them. We didn’t know when a Higgins boat was hit it would sink and guys would drown, that we would be machine-gunned as soon as we opened up the front gate and the ramp,” he recalled to The Telegraph.

“I jumped off the side. I had water up to my chest and had to bounce in, bounce in. My job was to lay down covering fire for the engineers so they could clear that beach. They blew up the beach wall and did a good job. Our job was to keep the Germans pinned down so they could work.”

The day was very different for William Blount who never actually landed on Normandy but still played a pivotal role in the defeat over Nazi Germany.

According to The Telegraph, the Royal Marine stayed on board a Landing Craft Gun vessel which was anchored nearby where he shot hundreds of shells towards the shore.

Blount stated: “I watched two torpedoes go by our 180ft LCG. There was nothing we could do. It was horrendous. We just had to watch and wait as it passed by.”

Meanwhile, veteran John Jenkins received a standing ovation in a ceremony in Portsmouth with the likes of the Queen, Prince Charles, Donald Trump and Theresa May all rising to honour him as he took to the stage, The Sun reports.

The 99-year-old gave a moving speech about his experience landing on the shores of Normandy 75 years ago as a 24-year-old.

“I was terrified. I think everyone was – you don’t show it, but it’s there,” he said to the crowd

“I look back on it as a big part of my life, it changed me in a way – but I was just a small part in a very big machine.

He added: “You never forget your comrades because we were all in there together.”

Were any of your loved ones involved in D-Day?