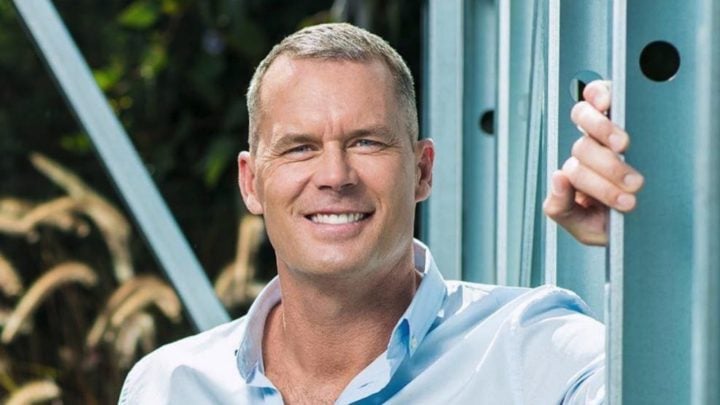 Tom Williams has opened up on his past pain after his dad's death. Source: Instagram/tomwilliams70 and truecoresteel.

TV star Tom Williams has opened up on the emotional impact his father’s death had on him from a young age, after he watched him battle addictions to alcohol and smoking before being diagnosed with cancer.

The former Channel 7 star, who is well known for hosting The Daily Edition and winning Dancing With The Stars, revealed his mother eventually checked him into therapy after he bottled up his grief for several years.

Speaking in an exclusive chat with Men’s Health Australia magazine, which he shared on his official Instagram page, the 48-year-old revealed his father’s addiction ended up tearing his family apart when Williams was just a teenager.

“When he came out of rehab, he was awesome. But he just couldn’t help himself and then he developed cancer. He died in ’89 when I was 19,” the TV star turned real estate pro told the publication.

Williams revealed in the five years after his family split up when he was 14, his father received a lot of care and stints in rehab – at great expense. Eventually though he became very ill.

Big thanks to @menshealthau for letting me spill my guts about Fatherhood and My Dad….on sale now. #menshealthmag #fatherhood #mentalhealthawareness #beagoodman

While doctors gave his father eight weeks to live, Williams revealed he went on to live another nine months – holding on right until the end.

At first he explained he bottled up his grief and spent the next six years “kicking tins”, before eventually realising he’d never dealt with his father’s passing at the age of 25.

“Mum checked me into therapy, which back in 1995 not a lot of kids were putting their hand up for,” he said. “It helped me talk about those feelings and talk about death and the things that were concerning me around Dad.”

Williams gave the deeply honest chat to help raise awareness of mental health. He got a stream of praise and thanks from his fans after sharing the moving interview on Instagram, with one writing: “Beautiful Tommy your dad would be so proud of the man and father you are!”

Another added: “Your daughters have a great dad,” and one wrote: “Great article mate, your dad would be very proud.”

Williams revealed earlier this year that he had left his TV career behind him for good to work full-time as a real estate agent.

“Property and real estate is my thing. It always has been, but most people haven’t known about it – until now,” Williams told Mosman Collective at the time.

Have you struggled with grief following a loved one’s death? Have you ever had therapy?