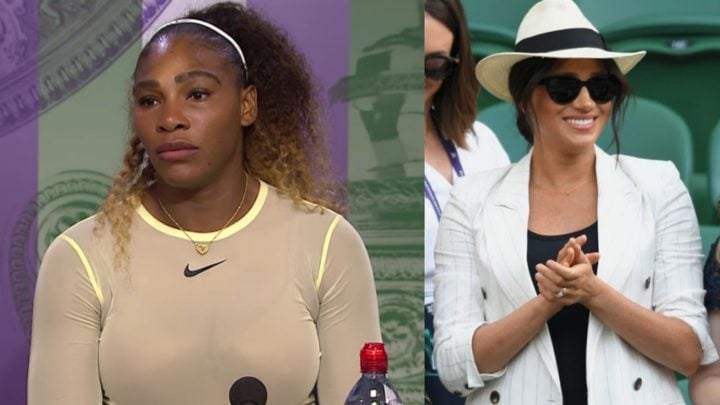 Serena Williams has made a rare public statement about Meghan after the duchess came under fire following her appearance at Wimbledon just days ago – with the tennis champ revealing just how much support her friend has given her over the years.

The Duchess of Sussex made a surprise public appearance at the start of the tennis tournament as Williams took on, and beat, opponent Kaja Juvan. However, she later got hit with a stream of backlash amid reports she banned all photos being taken of her – with British media personality Piers Morgan even branding her “hypocritical” for asking for privacy at a public event.

Asked about the negative headlines following the match, as she spoke during her post semi-final press conference on Thursday, Williams told a reporter: “You know, I didn’t know there was negative media out there.

“Any time I see her name attached to anything, I don’t read it. She couldn’t be a better friend to me. Low moments, high moments, she’s always there.

It comes after a report from The Daily Telegraph claimed that Meghan’s staff asked people, specifically a woman named Sally Jones, not to take photos of her because she was attending Wimbledon in “a private capacity”.

She wrote at the time: “No wonder there is a growing tide of resentment against the Sussexes for their secretive, high maintenance attitude and diva-ish demands for privacy when it suits them — despite the eye-wateringly expensive, taxpayer-funded refit of Frogmore Cottage.”

It’s not the first time Williams – who attended the Duke and Duchess of Sussex’ royal wedding in May last year – has hinted at her close bond with Meghan.

The tennis great previously revealed that they had been “relying” on each other’s support via regular text messages following the tennis star’s US Open drama last year.

Williams launched a blistering verbal attack on umpire Carlos Ramos during her final match against Naomi Osaka at the time, accusing him of sexism and branding him a ‘thief’ after he docked a point and handed out code violations to the tennis star throughout her match.

And in a tense TV interview with Aussie star Lisa Wilkinson on Channel 10’s The Project shortly after, Williams revealed she has been texting Meghan following the scandal.

“We were actually just texting each other this morning,” she said in the chat, which was filmed three days after her on-court antics. “We have known each other for a long time, but we really kind of are relying on each other right a lot recently.”

Are you a fan of Serena Williams? Do you think the backlash over Meghan’s Wimbledon appearance is fair?