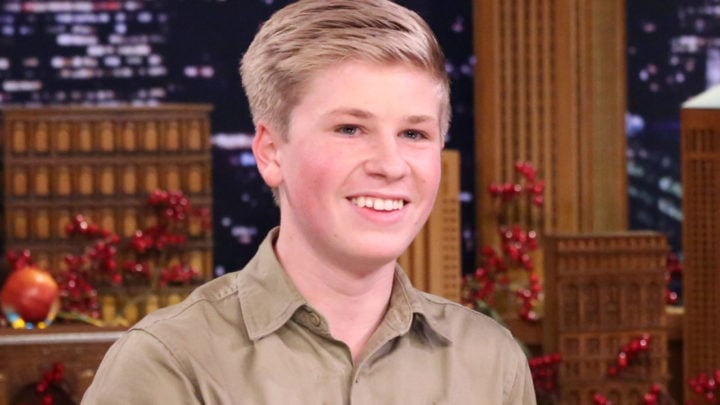 Having your wisdom teeth removed is no small feat, often leaving the patient’s face swollen and bruised, and Robert Irwin showed off the results of his own extraction surgery on Tuesday as he revealed he’d undergone the dental procedure.

Robert shared a before and after photograph on himself on Instagram and declared that he “looks like a chipmunk” after going under the knife. “Before and after wisdom teeth removal,” he captioned the photograph.

The first image shows a smiling Robert, wearing a blue t-shirt, while the second image shows the 16-year-old wildlife warrior appearing to smile through the pain, with his cheeks and jawline visibly swollen.

Robert, the only son of Crocodile Hunter Steve Irwin and wife Terri, also revealed he’s been forced to alter his diet as he recovers from surgery. He added: “I’m now enjoying mushy food and looking like a chipmunk!”

Before and after wisdom teeth removal! I’m now enjoying my mushy food and looking like a chipmunk! 😂🐿

Fans of the Irwin family were quick to wish Robert a speedy recovery, while many others shared their own stories of wisdom teeth removal and offered the teenager some tips on how to get through the painful period. One follower wrote: “Feel better soon!! It’ll go away in a couple of days , mashed potatoes were my favorite when I got mine out!!”

Another commented: “It does get better. Don’t worry!! I looked and felt like a chipmunk for about 2 weeks after mine. But so glad I got them out.” While another said: “Ice cream will be your best friend for a week or two!!”

Robert, Terri and newly-married couple Bindi and Chandler Powell are currently self isolating at the family’s Australia Zoo on Queensland’s Sunshine Coast, however the beloved Aussie family have kept their fans up to date with how they’re doing, and what they’ve been getting up to, whilst in lockdown.

Bindi, 21, tied the knot at the zoo at the end of March and on Wednesday she took to social media herself to reflect on her “beautiful” wedding day, as well as sharing some new photographs with her followers. The couple decided to bring their wedding forward due to the outbreak of coronavirus, and celebrated their nuptials with just three guests.

Sharing seven photographs on Instagram, some of which have never been seen before, Bindi wrote: “Our wedding day. Reflecting on these beautiful moments with the love of my life.” To which her American husband Chandler replied: “I love you so much. Best day of my life.”

Have you had your wisdom teeth removed?