‘More like your dad every day’: Robert Irwin is Steve’s double in sweet new snap 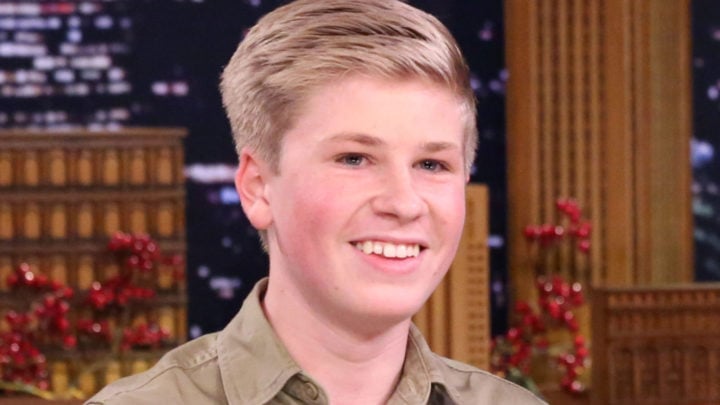 The 16-year-old wildlife photographer has followed in his father's footsteps. Source: Getty.

It has been almost 14 years since Australian icon Steve Irwin tragically passed away, but the Irwin family have worked hard to continue his conservation legacy and in turn have become one of the most treasured families in the country.

Steve’s son Robert, along with 21-year-old sister Bindi, has followed in his father’s footsteps in many ways and is already an established wildlife photographer in his own right, as well as being a regular at media events such as The Logies and on TV chat shows. And he may be just 16, but Robert has been taking part in the world-famous crocodile shows at Australia Zoo on the Sunshine Coast for years too.

So it’s no surprise that fans of the late wildlife warrior may mistake the youngster for his father, and they did just that this week when Robert shared an adorable photograph of himself cuddling up to a koala at the family’s Beerwah zoo.

The snap showed Robert – wearing the iconic khaki zoo uniform that is synonymous with his dad – holding a koala on his left arm as he closed his eyes and gently rested his head against the cute marsupial, and he simply captioned the shot with a love heart and koala emoji.

Fans couldn’t believe the resemblance between Robert and his late father, with many commenting on the post to share their memories of the Crocodile Hunter or praise Robert for the conservation work he does alongside his mum and sister.

One wrote: “I had to look twice! I was scrolling and thought it was a throwback of Steve!” Another said: “You look more and more like your Dad every day. It’s less the physical look (which is definitely there) and more your genuineness and heart that are so recognisable and (sadly) so rare. Keep it up!”

While another commented: “You look just like your dad. He is smiling down and very proud of you! Love your family and all you guys do!”

And one person said: “Wow…I thought this was a picture of your Dad as I scrolled. You look so much like him in this one.”

Robert celebrated his 16th birthday in December and proud mum Terri shared a never-before-seen photograph of her son and husband to mark the special occasion.

Terri, 55, praised her youngest child and said her late husband “would be so proud” of the teenager.