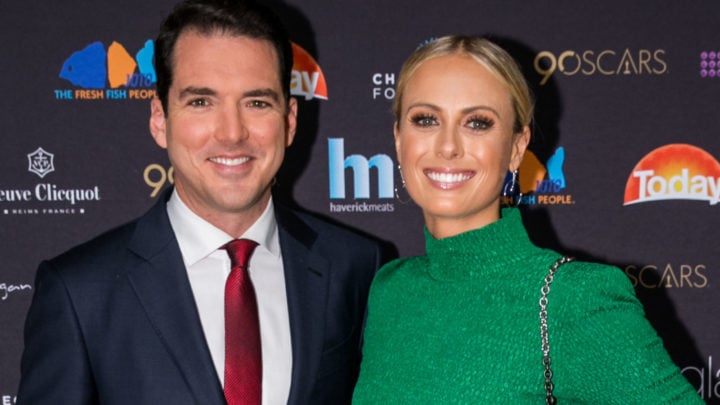 Baby Oscar is the couple's first child together. Source: Getty.

TV couple Peter Stefanovic and Sylvia Jeffreys have welcomed their first child together, as the couple shared an adorable photo of their newborn son on social media.

The couple, who met whilst working for Channel Nine and tied the knot in 2017, unveiled beautiful baby Oscar to the world on Thursday morning. Peter took to Instagram to share his pride in wife Sylvia and treated his followers to the first photo of the newest member of the Stefanovic clan.

“We’ve got our own Oscar!” Peter wrote. “I’m so unbelievably proud of @sylviajeffreys and our new best mate. Love is strong. Life is fantastic.”

The adorable photograph showed glowing new mum Sylvia cradling her baby boy in her arms as she smiles down sweetly at him, while Oscar sleeps soundly wearing a blue Winnie the Pooh sleepsuit.

“We’re having a baby boy and we’re totally over the moon!!” the 33-year-old wrote, alongside a photo of herself and Peter.

Peter, 37, also shared a post on his Instagram, writing in the caption: “Soon to be a family of three and we are rapt! Good thing I’m already match fit with the whole no sleep thing.”

Soon to be a family of three and we are rapt! Good thing I’m already match fit with the whole no sleep thing 😁

It won’t be long until little Oscar has a new cousin to play with either as Peter’s brother Karl Stefanovic and wife Jasmine Yarbrough are also expecting their first child together. Karl, who was previously married to journalist Cassandra Thorburn, also shares three children – Jackson, 20, Ava, 14 and River, 12 – with his ex-wife.

Karl and Jasmine, who tied the knot in Mexico in December 2018, have kept relatively tight-lipped about their impending arrival, however just last month Karl, 45, told radio hosts Kyle Sandilands and Jackie ‘O’ Henderson that his wife was “glowing”.

Do you have a message for the family? Do you remember the excitement you felt after having your own children?