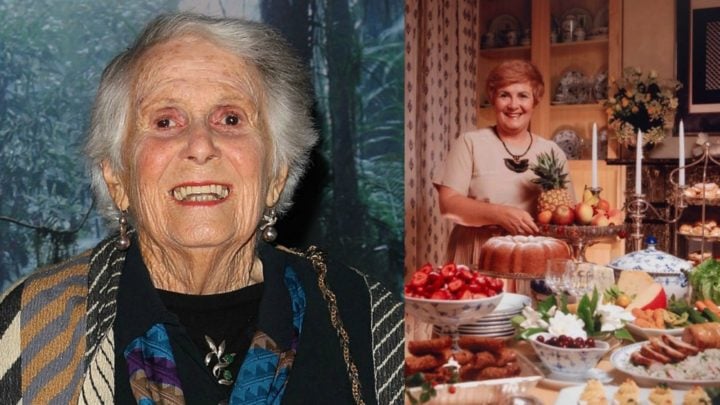 Australian cookbook author and food “guru” Margaret Fulton has died at the age of 94.

The talented cook’s granddaughter Kate Gibbs confirmed the sad news on Wednesday announcing the family are mourning the loss of their loved one.

In a statement shared with Delicious, Kate said: “The family of Margaret Fulton are today mourning the loss of their loving, inspirational and treasured mother, grandmother and great-grandmother this morning.

“They will release a statement in due course. Respect for their privacy at this time would be greatly appreciated.”

The celebrated author described as a “national treasure” is known best for her many cookbooks filled with delicious recipes that were a staple in most Australian households growing up.

She changed the way Aussies cooked and encouraged people to alter their usual meat and three veg diets to include more exotic dishes from Spain, Italy and India. Margaret’s most famous publications included the Margaret Fulton Cookbook and the Encyclopaedia of Food and Cookery.

Legendary food writer and culinary queen Margaret Fulton has died at the age of 94. #TDE7 pic.twitter.com/QXrZRJehU5

Tributes have already begun to roll in with many taking to social media to share their memories of cooking her recipes as a child.

Another reminisced on their time meeting the author writing: “Margaret Fulton wasn’t just a great cook, she was a member of the community. Many years ago we asked for a donation to our primary school fete, instead we got a book launch, a pikelet competition judge and a huge boost. Generous and gracious.”

While a third added: “#Vale Margaret Fulton – grand dame of Australian home cooking. An immeasurable influence on all of us who have cooked or eaten in an Australian kitchen.”

Do you have a message of condolence for Margaret Fulton’s family following her death?