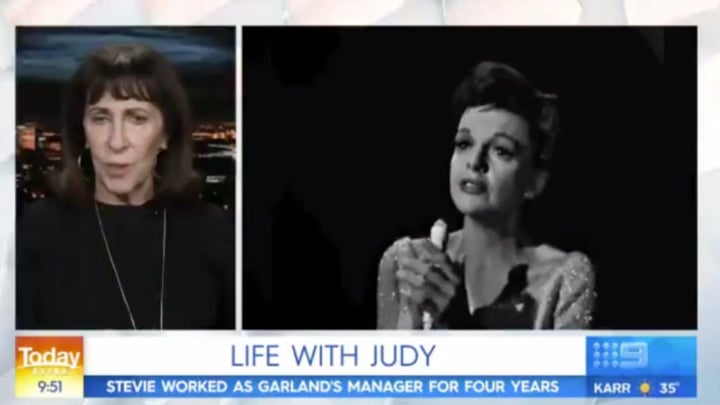 She is remembered as a great and talented actress of her time but Judy Garland’s former manager has explained the life of the star was anything but smooth, describing it as an “emotional rollercoaster”.

While on screen she seemed full of energy and happiness, playing some of the most sort after roles, behind the scenes Stevie Phillips said Judy was in great emotional pain with severe highs and lows. Speaking to the Today Show 50 years after her tragic death, the 83-year-old claimed The Wizard of Oz star experienced extreme anger and once came at her with a knife.

Opening up about life with Judy amid the star’s drug and alcohol addiction, Stevie told the hosts: “Judy was in great emotional pain, coupled with a lot of physical pain as well and she medicated in order to be able to function. But being with her was like being on an emotional rollercoaster.

“Up at the top of the ride the laughter was very brittle, she was very angry, and at the bottom she was inconsolable … she couldn’t function.” Adding: “It was somewhere in the middle when drugs brought her to ground zero that you could get her to sign a cheque and go on stage and when she did that she was extraordinary, there was nobody better.”

“Being with her was like being on an emotional rollercoaster.” Judy Garland’s close friend and former manager Stevie Philips recounts the star’s tragic decline and what she thinks of Renee Zellweger’s biopic ‘Judy’. #9Today pic.twitter.com/7tC80AUwG3

However, despite her incredible success, being in the spotlight took it’s toll on Judy and Stevie explained at one point she approached her with a knife. The former manager explained on the Today Show that they had been playing cards one night when Judy passed out, hitting her face on a glass coffee table and seriously injuring her mouth, nose and eye.

After being examined by a doctor, Stevie said she was told Judy would sleep for hours and there was nothing to worry about, but he was wrong. An hour later the former manager said the actress woke up and came into her room, accusing her of taking her drugs away.

Explaining that the doctor had taken them away Stevie told the hosts: “She came into my bedroom looking like a ghoul and she said ‘what did you do with my drugs?’. She went into the kitchen and got a kitchen knife, the sharpest knife that she could find and came after me with it.” Thankfully, Stevie was able to fight her off and was not injured.

The revelation comes months after the first trailer for Judy, the highly-anticipated biopic profiling Hollywood’s golden girl Judy Garland was released to the public. The new trailer provided a first look at Oscar winner Renee Zellweger playing the troubled entertainer, seven decades after she shot to fame in iconic musical The Wizard of Oz.

Set in the latter part of the performer’s career, the film takes place in 1968, when a struggling Garland arrives in London to perform a run of sold out concerts at the Talk of the Town nightclub, and centres around her breathtaking performances and her troubled private life.

The biopic also touches on her romance with Mickey Deans, the man who would become her fifth and final husband. There was also plenty of footage of Zellweger singing several of Judy’s signature songs, including ‘The Trolley Song’, ‘Come Rain Or Come Shine’ and of course, ‘Over The Rainbow’.

The trailer was a hit with fans who were quick to comment on their excitement and anticipation to watch the movie in the coming months. “Very excited about the trailer and the film! Wish I could watch the whole thing today,” one commentator wrote. Another added: “Very much looking forward to this.”

Garland’s life was one of soaring highs and heartbreaking lows as she struggled with drug and alcohol addiction while giving the world hits like ‘Get Happy’, ‘The Trolley Song’ and ‘Over the Rainbow’.

Her Talk of the Town performances were some of the last she ever gave before her death, aged just 47. Deans found Garland’s lifeless body in the bathroom of their rented London home just six months after she arrived in London. An official investigation into her death confirmed she accidentally overdosed on barbiturates, a prescription drug for anxiety and insomnia.

What is your favourite film or musical of Judy Garland's? Are you planning on seeing the film about her life?