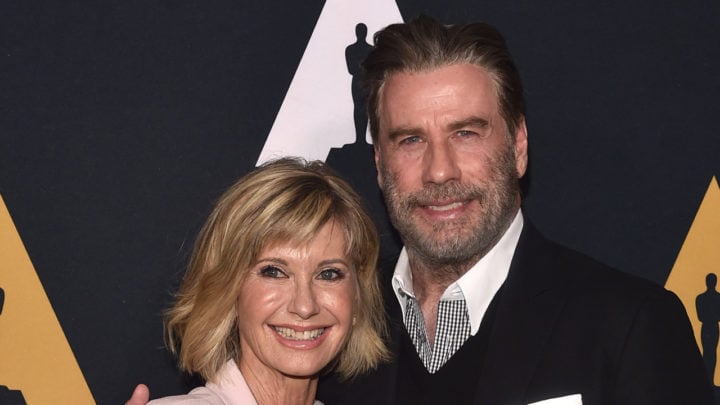 John Travolta shared a sweet message about his friend Olivia Newton-John as she continues her battle against breast cancer. Source: Getty

John Travolta has proved his friendship with Olivia Newton-John is still going strong as he shared a sweet message about his Grease co-star as she continues her fight against cancer.

The talented actor gushed over how proud he is of the Aussie during a recent interview on the red carpet for the premier of his latest movie The Fanatic, praising her for keeping up a good appearance amid her battle. Taking a few moments for a chat the 65-year-old said in a video shared online: “She [Olivia] looks incredible.”

Adding with a smile: “She doesn’t look any different than [she did] years ago and I’m very proud of her. I’m very happy about Olivia.”

The two have maintained a close bond since their appearance on hit movie Grease where John played cool guy Danny and Olivia took on the role of beauty Sandy Olsson. John’s comment about his co-star come weeks after Olivia opened up about her health and battle against cancer as she continues her fight with the illness for the third time in her life.

The 70-year-old spoke exclusively to 60 Minutes about her journey to date and positive outlook on life as she enjoys down-time with her husband John Easterling at their home in Santa Barbara, California. Olivia was first diagnosed with breast cancer in 1992. The talented actress had a partial mastectomy, chemotherapy and breast reconstruction to beat the disease.

It was a success and the mum-of-one went on living a happy a joyous life until almost two decades later when the cancer re-appeared in 2013 and then again in May 2017.However, as the strong woman she is, Olivia hasn’t let that bring her down, admitting she is “back to full force” and not letting the cancer take over her life.

“I had moments when I was concerned I may not walk again, I had one leg that was pretty wonky for a while but I was determined that I would,” she explained on 60 Minutes. “So I started out in a wheelchair and then a walker and then a cane and now, I’m back in full force again.”

For the first time, @OliviaNJ reveals her fears around her cancer returning for the third time and how she visualises her body’s healing. #60Mins pic.twitter.com/pi2tmHMKDr

Unlike others who may constantly focus on the cancer infecting her body, the Grease star said she’s not letting it become a demon and engulf her. Olivia explained “everything’s a choice” and that she doesn’t like seeing the cancer as something in her body she’s getting rid of.

“I don’t talk about a battle or a war because I think that sets up that feeling in your body that you’re battling something strange inside you,” she said on 60 Minutes.“I say ‘let it go’ and tell it to leave and talk to my body to heal itself and don’t try and make it that because that takes up your whole life and your whole being.”

Olivia added: “I kind of have a way of disassociating and compartmentalising it. Otherwise you become a victim, which I don’t want to be and I’m not. Or you become a slave to it and talk about it all the time which I try not to do either. In my meditations I visualise it leaving and I see the herbs and medicines that I’m taking making it go.”

Chloe Lattanzi admits she’s still coming to terms with her mother’s third cancer diagnosis, but her focus is on keeping Olivia well by giving her all the support she needs. #60Mins pic.twitter.com/O6JYhylq26

Despite her ongoing strength,Olivia’s cancer battle hasn’t been easy for her daughter Chloe Lattanzi to witness. Also speaking to 60 Minutes about her mum’s health journey the 33-year-old described her mother as “amazing” and said she just wants her mum to be able to relax and enjoy life without the pressure of having to be a performer.

Are you a fan of John Travolta and Olivia Newton-John? What do you think of their friendship over the years?