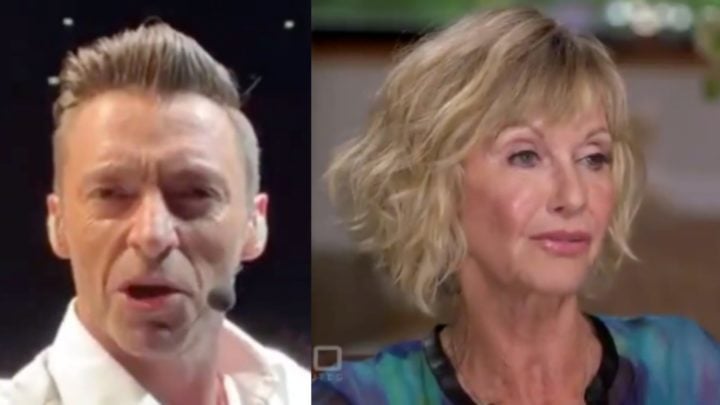 Hugh Jackman has shared a special message with his friend and fellow Aussie performer Olivia Newton-John as she continues her fight against cancer. Source: Twitter/ Hugh Jackman and Twitter/ 60 Minutes

Aussie actor Hugh Jackman has described friend and fellow performer Olivia Newton-John as the “most amazing person” in an emotional and touching message to the star this week.

The 50-year-old took the opportunity during one of his live Australian show’s to pay tribute to Olivia with the help of thousands of her adoring and supportive fans.

While on stage on Monday night Hugh filmed a special moment with the crowd in honour of the Grease star following her heart-wrenching interview on Channel Nine’s 60 Minutes, which aired at the weekend.

In the video, which was later shared online by the actor, Hugh said: “Hi Olivia, it’s Hugh and 15,000 of your friends and fans.

“I don’t know if all of you saw 60 Minutes last night but I watched that and Deb and I were crying.”

Hugh then turned back to the crowd before they all shouted “we love you Olivia” and the actor planted a kiss on the camera.

The footage shared on Twitter has gardened a lot of attention from fans who shared their love and support of both Hugh and Olivia.

“You and Olivia are two Australian legends, I love you both so much!” one person commented. “Olivia, thank you for your songs, movies and for always helping people, you’re such an inspiration! Bless you.”

While another added: “And we love you, mate. Thank you for being such an amazing person. A real inspiration, just like Olivia.”

And a third said: “You are an absolute sweetheart. I’m sure Olivia appreciates the well wishes.”

Hugh’s message follows Olivia’s appearance on 60 Minutes on Sunday night where she discussed her health and battle against cancer as she fights the illness for the third time in her life.

The 70-year-old spoke exclusively to the program about her journey to date and positive outlook on life as she enjoys down-time with her husband John Easterling at their home in Santa Barbara, California.

Olivia was first diagnosed with breast cancer in 1992. The talented actress had a partial mastectomy, chemotherapy and breast reconstruction to beat the disease.

It was a success and the mum-of-one went on living a happy a joyous life until almost two decades later when the cancer re-appeared in 2013 and then again in May 2017.

However, as the strong woman she is, Olivia hasn’t let that bring her down, admitting she is “back to full force” and not letting the cancer take over her life.

“I had moments when I was concerned I may not walk again, I had one leg that was pretty wonky for a while but I was determined that I would,” she explained on 60 Minutes.

For the first time, @OliviaNJ reveals her fears around her cancer returning for the third time and how she visualises her body’s healing. #60Mins pic.twitter.com/pi2tmHMKDr

“So I started out in a wheelchair and then a walker and then a cane and now, I’m back in full force again.”

Unlike others who may constantly focus on the cancer infecting her body, the actress said she’s not letting it become a demon and engulf her.

Olivia explained “everything’s a choice” and that she doesn’t like seeing the cancer as something in her body she’s getting rid of.

“I don’t talk about a battle or a war because I think that sets up that feeling in your body that you’re battling something strange inside you,” she said on 60 Minutes.

“I say ‘let it go’ and tell it to leave and talk to my body to heal itself and don’t try and make it that because that takes up your whole life and your whole being.”

Olivia added: “I kind of have a way of disassociating and compartmentalising it. Otherwise you become a victim, which I don’t want to be and I’m not. Or you become a slave to it and talk about it all the time which I try not to do either. In my meditations I visualise it leaving and I see the herbs and medicines that I’m taking making it go.”

Are you a fan of Hugh Jackman and Olivia Newton-John? Did you watch the interview with Olivia on 60 Minutes?