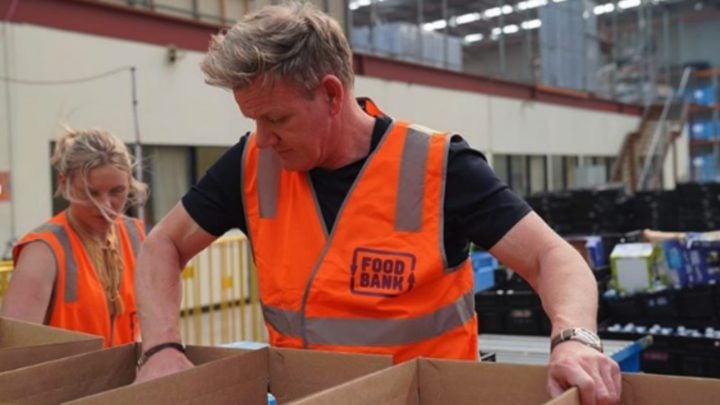 Gordon Ramsay may be rich and famous but he’s certainly down to earth, as he showed when he pitched in to pack food hampers for Aussies affected by the devastating bushfires.

The British chef, who is in Australia to promote his new Gordon Ramsay Quick and Delicious Summer Book Party, dropped by Foodbank Victoria on Monday to thank staff and volunteers for their tireless efforts and to lend a hand himself on the production line.

Wearing an orange hi-vis vest, the father-of-five got busy packing food hampers with staples such as cereal, pasta, rice and cooking sauces for people in bushfire-affected communities around Victoria.

Ramsay’s visit wasn’t a planned publicity stunt either – Foodbank Victoria posted on Facebook that staff and volunteers were really surprised when Gordon popped by. In total, the non-profit has provided more than 3,000 hampers to Australians who’ve lost homes and possessions to the fires.

Ramsay himself was grateful for the chance to help, using an Instagram post to thank the amazing Foodbank Victoria volunteers. “So incredible to spend time with you today,” he added.

Thank you to the amazing volunteers at the @foodbankvictoria for helping all those affected by the Bushfires…..so incredible to spend time with you today Gx

Many fans thanked Gordon for his efforts, with one writing, “Thanks Gordon for being there to help.” Another added, “Good on ya Gordon. The Aussie spirit is strong with you,” while a third wrote: “You’re a champ Gordon.”

The celebrity chef has already auctioned a private lunch for two guests to raise funds for the Red Cross Disaster Relief and Recovery Fund to aid the bushfire fight and recovery efforts.

He’s one of dozens of famous and wealthy people who’ve pledged their support for the bushfire effort.

Last week mining magnate Andrew ‘Twiggy’ Forrest pledged a whopping $70 million to the relief effort. The WA billionaire announced the huge financial package on social media, via his Minderoo Foundation, and explained that the monetary aid will not only go towards combatting the ongoing fires and helping communities rebuild, but it will also fund research to try and prevent similar disasters in years to come.

Sydney restauranteur Justin Hemmes has thrown $500,000 into the relief effort, while James Packer and his family, combined with Crown Casinos, put in $5 milion. The Pratt family, which owns Australia’s Visy Industries, has donated $1 million through its foundation, as have philanthropists John and Pauline Gandel.

The couple, whose property in rural New South Wales was under threat from fires last week, said their money would go to the Rural Fire Services.

“Our family’s support, thoughts and prayers are with everyone affected by the fires all over Australia,” Nicole wrote on Instagram. “We are donating $500,000 to the Rural Fire Services who are all doing and giving so much right now.”

Metal band Metallica gave $500,000 to the NSW Rural Fire Service and Victoria’s Country Fire Authority, while pop star Pink, matched that amount with donations to Australian fire services. Bette Midler has given $500,000, as have Kylie and Dannii Minogue and musicians Nick Cave and Warren Ellis.

Meanwhile, a fundraising effort set up by Aussie comedian Celeste Barber, who has a huge online following, has topped $50 million, having garnered global attention.

While the fires have shown no signs of slowing in recent weeks, the New South Wales Rural Fire Service said on Monday that a forecast ‘rain bomb’ could significantly help to dampen the flames and prevent further spreading. The Bureau of Meteorology published a map that shows rain forecast for almost all of NSW in the next seven days.

If this @BOM_NSW rainfall forecast comes to fruition then this will be all of our Christmas, birthday, engagement, anniversary, wedding and graduation presents rolled into one. Fingers crossed. #NSWRFS #nswfires pic.twitter.com/R9VfD0bqu2