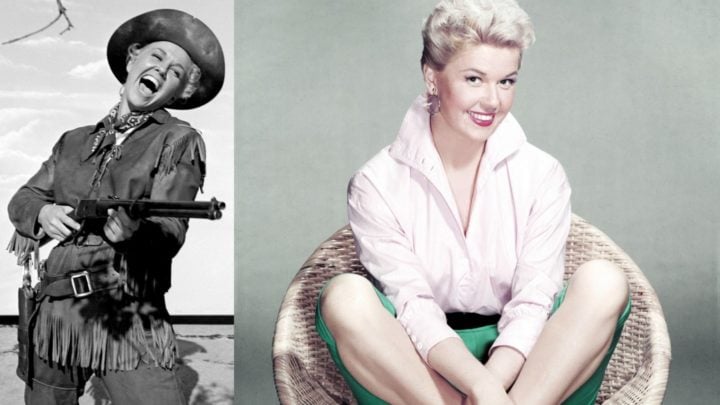 Day began her career as a singer at the age of 15, going on to star in a total of 39 Hollywood movies. Source: Getty.

Hollywood icon Doris Day has passed away at the age of 97 after contracting a serious case of pneumonia.

The American actress and singer died in the early hours of Monday morning (US time) at her home in Carmel Valley, in Monterey County, California, one month after celebrating her 97th birthday.

Day’s death was confirmed in a statement released by her charity the Doris Day Animal Foundation, who said the Calamity Jane star was surrounded by a handful of close friends at the time of her passing.

“Day had been in excellent physical health for her age, until recently contracting a serious case of pneumonia, resulting in her death,” the statement read.

Day – who was born Doris Mary Ann Von Kappelhoff – launched her singing career at the age of just 15, enjoying her first hit with track ‘Sentimental Journey’ which she released with Les Brown’s band in 1945.

She went on to enjoy huge success with hits including ‘Que Sera Sera’ as well as making a name for herself in Hollywood, starring in some of the most well-known films of the 1950s and ’60s.

The statement continued: “During her three decades of work in film, Day starred in nearly every genre, not just as a singer/dancer but as an actress with superb comic timing, a natural talent for interpreting a role and a gift for evoking emotion.

“Her 39 films – many still incredibly popular and shown frequently today — stand as a testament to her talent. ”

It has also been confirmed that Day had left instructions that there should be “no funeral or memorial service and no grave marker”.

Tributes flooded in for the star, who was married a total of four times, divorced three times and was widowed once.

Paul McCartney remembered Day on his website, saying: “So sad to hear of Doris Day passing away. She was a true star in more ways than one. I had the privilege of hanging out with her on a few occasions. Visiting her in her Californian home was like going to an animal sanctuary where her many dogs were taken care of in splendid style.

“She had a heart of gold and was a very funny lady who I shared many laughs with. Her films like ‘Calamity Jane’, ‘Move Over, Darling’ and many others were all incredible and her acting and singing always hit the mark. I will miss her but will always remember her twinkling smile and infectious laugh as well as the many great songs and movies she gave us. God bless Doris.”

Condolences to the family of Doris Day. She was the World’s Sweetheart and beloved by all. ❤️ Que Será, Será!😞

Mary Poppins star Dick Van Dyke told the BBC: “She wasn’t trying to act. It was just who Doris Day was, I think, a great energy and exhilaration, and she seemed to love life, at least that’s the impression you got. It was a great era.”

While William Shatner tweeted: “Condolences to the family of Doris Day. She was the World’s Sweetheart and beloved by all. Que Será, Será!”

Day’s only child Terrence Paul Jorden, her son with Al Jorden, who was later known as Terry Melcher, died in 2004.

Do you have a message of condolence for Day’s family and friends? Were you a fan of her music or films?