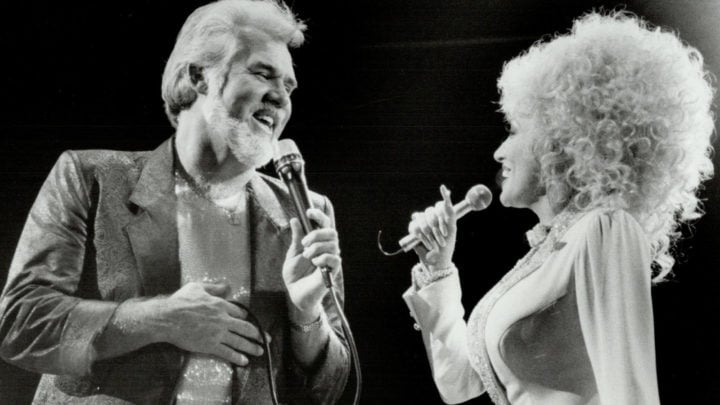 Dolly Parton said her heart is broken after learning the news of her friend and singing partner's death. Source: Getty.

Country music legend Kenny Rogers passed away on Friday at the age of 81, and now his close friend Dolly Parton has paid an emotional tribute to the star, just hours after his death was confirmed.

The ‘Islands In The Stream’ singer’s family confirmed the news on Saturday, revealing that Rogers passed away ay home, surrounded by his family and under hospice care.

Dolly, who performed with Rogers on numerous occasions over the decades, said her heart is broken after hearing the news of her friend’s death, who she described as a “wonderful man”. The ‘Jolene’ singer shared two emotional video messages on social media, and fought back tears as she honoured the late star.

“Well, I couldn’t believe it this morning when I got up and turned on the TV … And they told me that my friend and singing partner Kenny Rogers had passed away,” Dolly said.

“I know that we all know Kenny is in a better place than we are today. But I’m pretty sure he’s going to be talking to God … and he’s going to be asking him to spread some light on parts of this darkness that’s going on here.

“I loved Kenny with all my heart, my heart’s broken and a big ol’ chunk of it has gone with him today.”

She finished the message by saying: “I think that I can speak for all his family, his friends and fans, when I say that I will always love you.”

You never know how much you love somebody until they’re gone. I’ve had so many wonderful years and wonderful times with my friend Kenny, but above all the music and the success I loved him as a wonderful man and a true friend. So you be safe with God and just know that I will always love you, dolly.

She also wrote a heartfelt caption alongside the video, which read: “You never know how much you love somebody until they’re gone. I’ve had so many wonderful years and wonderful times with my friend Kenny, but above all the music and the success I loved him as a wonderful man and a true friend. So you be safe with God and just know that I will always love you, dolly.”

The pair released ‘Islands in the Stream’ in 1983, which was their first song together. After the track, which was written by the Bee Gees, reached number one, the duo went on to record dozens more songs together.

Kenny’s death was confirmed in a statement published online on Saturday, which read: “The Rogers family is sad to announce that Kenny Rogers passed away last night at 10:25PM at the age of 81 … The family is planning a small private service at this time out of concern for the national COVID-19 emergency.

“They look forward to celebrating Kenny’s life publicly with his friends and fans at a later date.”

Many other stars also paid tribute to ‘The Gambler’ singer, including La Toya Jackson who shared a photograph of herself with the singer and sister Janet Jackson. She wrote: “So saddened by the news on #KennyRogers this #SaturdayMorning. He was an incredible singer I was just playing his songs 2days ago. A family favourite we played his music constantly.”

While Reba McEntire wrote on Instagram: “Kenny, Go rest high on that mountain. Please tell mama and daddy hi for me. Thank you for your friendship and your love.
”
We are going to miss you but we are so happy you’re singing with the Angels in heaven. Can’t wait to see you again one of these days. Rest in peace my friend.”

Were you a fan of Kenny Rogers' music?