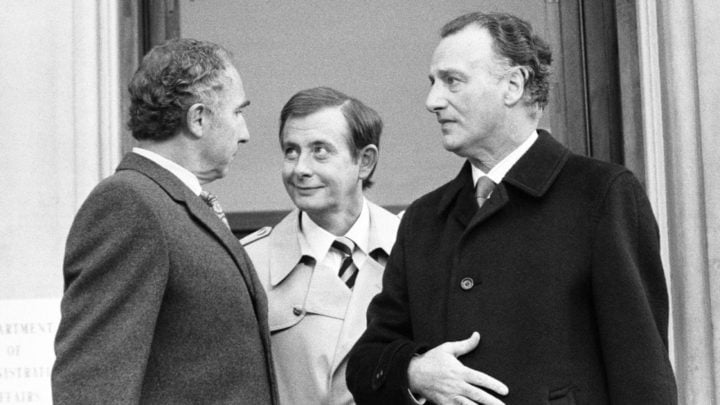 Having starred in popular television series such as Heartbeat, Yes Minister and The Basil Brush Show, Derek Fowlds earned himself a place among British TV royalty. However there was sad news this week as it was confirmed that the 82-year-old had passed away.

Fowlds, whose career spanned an impressive six decades, died of heart failure, which was brought on as a result of sepsis, according to British newspaper The Sun.

He will perhaps be best remembered for his role as Oscar Blaketon in Heartbeat – which also aired in Australia – a role he played for the show’s entire 18-year run.

Fans of the series will remember Oscar as the village’s stern police sergeant who spent his days trying to pin down local rogue Claude Greengrass, before he retired from the force after a heart attack and took over the local post office, and later the local pub.

I don’t know what to say, I’m so desperately sad. 😢😢🦊such times we had, rest in peace Mr Derek, my best friend forever #DerekFowlds #BasilBrushshow pic.twitter.com/iQqI8v1Plm

Derek’s TV career was launched, however, by his role on hit children’s series The Basil Brush Show, after he landed the role as the fox’s sidekick Mr Derek in 1969.

Following the news, the official Basil Brush account tweeted: “I don’t know what to say, I’m so desperately sad. Such times we had, rest in peace Mr Derek, my best friend forever.”

Fans will also no doubt remember Derek as private secretary Bernard Woolley in BBC sitcom Yes Minister. Over the years he also starred in the likes of The Darling Buds of May, The Royal and Inspector Morse.

According to the news outlet, Fowlds passed away in the early hours of January 17 at Royal United Hospitals Bath, after suffering from pneumonia that led to heart failure caused by sepsis. He was reportedly surrounded by his family and is survived by sons Jamie and Jeremy, also an actor.

Fans paid tribute to the star on social media, following the sad news, with one person saying: “Such sad news. A brilliant comic actor; in my mind, he will be forever Bernard. Farewell to the last of the monumental ‘Yes Minister’ trio.”

Another wrote: “A most lovely character actor. I loved Heartbeat when it first came out and still love the repeats. Thanks Derek for making such a great show even greater. R.I.P Derek.”

While another commented: “Derek folds. RIP. He was a great character actor across the last several decades.”

Do you remember watching Heartbeat or Yes Minister?