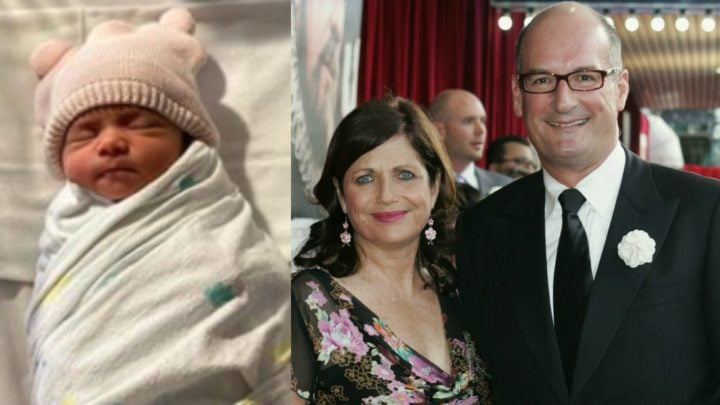 The Sunrise star is now a grandfather of six. Source: Instagram/Getty.

David ‘Kochie’ Koch became a grandfather for the sixth time this week as his daughter Brianna Jayasinghe gave birth to her third child in Perth, WA.

The Sunrise presenter announced the arrival of the newest family member – who has been given the sweet name Ella Hope Elizabeth – on social media on Tuesday evening. However Kochie revealed his sadness at being unable to visit Ella due to the ongoing coronavirus emergency, after Western Australia closed its borders.

“Welcome to the family Ella Hope Elizabeth Jayasinghe you gorgeous little girl,” the 64-year-old wrote on Instagram, alongside three gorgeous photos of baby Ella, including one which showed the bub enjoying a nap with her mum.

“You’re so lucky to have such a wonderful mum … and Dad and 2 brothers,” he added: “Grandchild number 6, born in Perth and devastated we can’t be there for a cuddle.”

Welcome to the family Ella Hope Elizabeth Jayasinghe you gorgeous little girl. You’re so lucky to have such a wonderful mum … and Dad and 2 brothers. Grandchild number 6, born in Perth and devastated we can’t be there for a cuddle.

As the country continues to tackle the spread of the virus, the feeling of being unable to connect with family is one that many people can relate to and many of Kochie’s followers also shared their own pain at being unable to see or spend time with their own grandchildren.

One user commented: “I feel for you Kochie I have a little great granddaughter due next month over in the west and I am here in NSW I had planned to visit in June , now I don’t know.”

Another wrote: “Congrats, we missed our grand daughters 1st Birthday and are devastated too.” While another said: “So cute. We had our 5th born yesterday here in Perth and we still can’t go in and have cuddles.”

Meanwhile some of Kochie’s Channel Seven colleagues, including weather presenter Sam Mac, also sent their best wishes to David and his family at this special time.

Kochie has been married to wife Libby for more than four decades and the couple share four children, Alexander, Georgina, Samantha and Brianna, together. Newborn Ella is the couple’s sixth grandchild, and the third child of Kochie’s daughter Brianna who also shares sons Jax, eight, and Teddy, four, with husband CJ.

Libby and David’s daughter Samantha Brown also has three children of her own; Matilda, 13, Oscar, 11, and nine-year-old Lila.

Do you have grandchildren? Are you missing them during this difficult time?