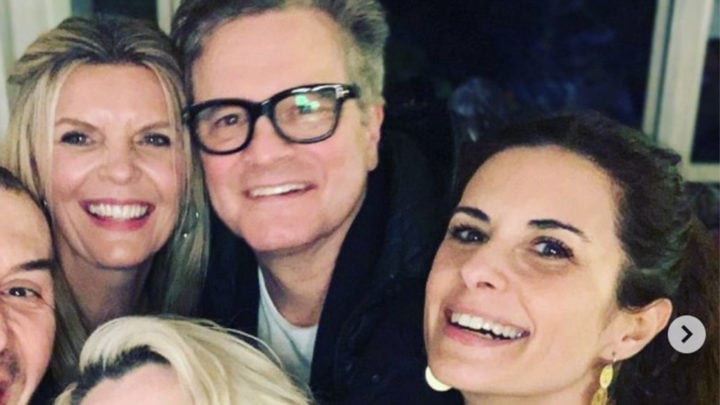 They may have decided to call their relationship quits but it seems British actor Colin Firth and his ex have remained on good terms as they celebrated New Year’s Eve together with their friends.

Last month it was revealed the Love Actually star had split from Italian film producer Livia Giuggioli after 22 years married and two years after Livia admitted to an affair with a man who allegedly stalked the couple.

Now weeks later they have been spotted smiling happily together as they farewelled 2019 and welcomed a new decade. Livia took to social media to share a photo of the pair, along with three of their friends enjoying each other’s company and proving there is such a thing as friendly exes.

How we ended and how we began ❤️ @massimoserini.official @karenalder @sarahdeweymassage Colin and many more ❤️ bye 2019 and helooooooo new decade! 🌈🦋🎈

Colin stood at the back of the photo with his arm wrapped around his Livia’s shoulder.  Meanwhile, in a second photo the actor could be seen sitting outside enjoying the sunshine on New Year’s Day with his friends.

“How we ended and how we began,” Livia wrote on the post. “@massimoserini.official, @karenalder, @sarahdeweymassage, Colin and many more. Bye 2019 and helooooooo [sic] new decade.”

Just weeks ago the couple released a statement to the press, explaining they had decided to seperate. Speaking to Page Six Colin and Livia said they maintain a close friendship and remain united in their love for their children.

The breakup came almost two years after Livia confirmed she had a relationship with a man accused of stalking the glamorous couple.

The Times reported at the time that Firth and Livia had reported Italian journalist Marco Brancaccia to police for harassing them with “frightening” messages and threats.

The couple released a statement revealing they briefly separated between 2015 and 2016, and during this time Livia had an affair with the accused.

The story first came to light after court documents on the case were leaked to Italian newspaper La Repubblica. Brancaccia denied the allegations and said he only sent two messages and an email, according to People.

“She wanted to leave Colin for me,” he reportedly said, adding that the marriage had “been over for years.”

“I wrote an email to Colin about my relationship with Livia, which I now regret sending, and she filed a complaint against me for stalking out of fear that I could go public with what she had revealed to me about her marriage and work,” he said.

Have you maintained a good friendship with your ex? Do you think it's a good idea to do so?