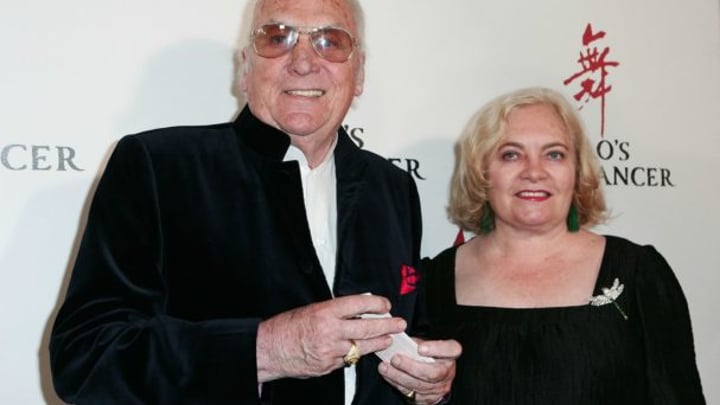 John Laws and wife Caroline arrive for a film premiere at the State Theatre in Sydney in September 2009. Source: Getty

Caroline Laws, the wife of Aussie radio legend John Laws, has died following a long battle with cancer, the radio legend has confirmed.

Caroline was diagnosed with ovarian cancer in mid-2016 during a routine check-up with her doctor and at the time was given just six months to live. Now almost four years later, at the age of 82, she has succumbed to the disease, with her husband’s radio show announcing her passing on social media.

The John Laws Show 2SM Twitter page said on Monday morning: “It is with a heavy heart, we announce this morning the sad passing of Caroline Laws – beloved wife of legendary Australian broadcaster John Laws. Vale Caroline Laws – you will be forever loved by all”.

It is with a heavy heart, we announce this morning the sad passing of Caroline Laws – beloved wife of legendary Australian broadcaster John Laws.

Vale Caroline Laws – you will be forever loved by all. pic.twitter.com/6IfK9hUewO

Tributes quickly poured in, with fans of the show leaving comments for John, nicknamed ‘Golden Tonsils’ for his distinctive voice, as he grieves the loss of his wife.

“Dear John, my condolences for this heartbreaking news,”@australian_ben wrote on the Twitter post. “God Bless You in this trying time of grief. You loved Caroline with all your heart and each day you sang songs on the radio, it was clear to anyone that you were singing to your dear wife. We love you John.”

“A sad day …  a wonderful marriage and a wonderful lady … our thoughts are with you John,”@ChrisRussellAg said. “Sad news. Such a long time together. A moment of silence for you,”@sparklegem66 added.

John said it was “love at first sight” when he and Caroline first met as teenagers in 1951, however they didn’t immediately become a couple because promising ballerina Caroline moved to London to pursue her career. When she returned to Australia 20 years later, John, now 84, had established himself on the air and the pair were reunited. “As soon as she came back into my life that was it, she was the woman and we’ve been together ever since,” he told The Australian Women’s Weekly in December 1976.

Laws frequently referred to Caroline as ‘the Princess’ on air and described her as his greatest confidant.

Former colleague, now on 2GB, Ray Hadley offered John his sincere condolences on the loss of his beautiful wife. Speaking on 2GB, Ray described Caroline as an “extremely elegant and delightful lady”. “It would be impossible to even comprehend what John’s going through at the moment,” he said.

JUST IN | The wife of radio broadcaster John Laws has passed away.

Caroline Laws, lovingly referred to as ‘the Princess’, died after a long battle with cancer.

Our best wishes are with John and the family. pic.twitter.com/X7pqDasd0Q

Are you a fan of John Laws' show? Do you remember him talking about his wife Caroline?