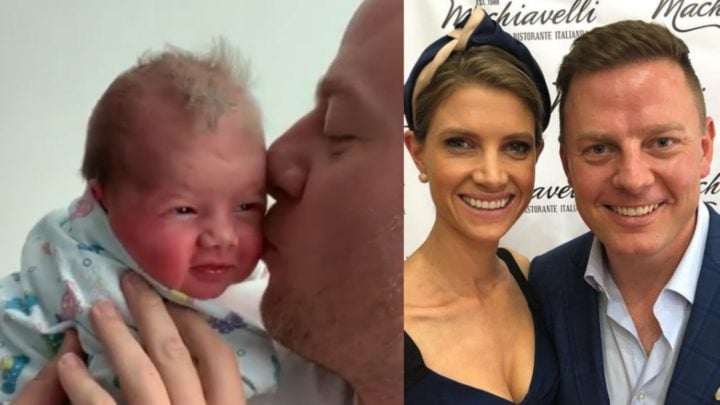 Ben Fordham has welcomed his third baby with wife Jodie Speers, with the Aussie TV star confirming the news in a sweet video on social media. And the couple have chosen a very retro name for their adorable new addition.

The 42-year-old dad-of-three praised his wife and revealed they’re both “head over heels in love”, as he held up his daughter to the camera and planted a kiss on her cheek. Showing off a full head of hair, the newborn appeared very sleepy in the clip and her dad looked delighted throughout.

Revealing they have chosen to name her Marigold Jean, Ben captioned the video: “Marigold Jean Fordham has arrived and we’re head over heels in love. Jodie was incredible and Freddy and Pearl are about to meet their gorgeous little sister.” He added two star emojis and the name “Goldie”, appearing to hint at her new nickname.

🐥 GOLDIE 🐥 Marigold Jean Fordham has arrived and we’re head over heels in love. Jodie was incredible and Freddy and Pearl are about to meet their gorgeous little sister.

The Ninja Warrior host also shares four-year-old son Freddy and one-year-old daughter Pearl with Jodie. And the new mum shared her own photo of Marigold on Instagram too, revealing she weighed 3.85kgs and “arrived yesterday arvo in her own unique style”.

Channel Nine’s Today Show page also congratulated the pair with Deborah Knight commenting as well as the team as a whole, who wrote: “Congratulations are in order for Ben Fordham and Jodie Speers who have just welcomed a gorgeous new addition to their family! Welcome to the world, Goldie!”

They shared a new photo of Goldie online too, showing her lying down and wrapped up warm in a blanket. The black and white photo was taken close up and shows her with her mouth open on the verge of sleep.

Congratulations are in order for Ben Fordham and Jodie Speers who have just welcomed a gorgeous new addition to their family! Welcome to the world, Goldie! 💕👶 #9Today

Ben previously joked that he wasn’t expecting the news that his wife was pregnant for a third time, telling New Idea: “I was actually happy with the two… I said, ‘Look, we have a boy and a girl, the perfect pair, let’s leave it at that’. But Jodie suggested, well she told me, actually, that we were having a third.”

He confirmed the news Jodie was expecting earlier this year, posting a 3D video of unborn Goldie at their 18-week ultrasound. He wrote on Instagram at the time: “Incoming !!! Baby #3 coming soon to the Fordham family. Love ya @jodiespeers.”

Meanwhile Jodie shared her own sweet video of her two children sharing their favourite names, as their dad asked them: “So, if we were to have another baby, do you guys have any good names?” Safe to say their suggestions of “Apple” and “Chocolate” weren’t taken onboard.

“We’re looking forward to welcoming one more sibling for these two come September! Not sure their name suggestions will make the cut, but we’ll keep working on it,” Jodie captioned the post at the time. Ben worked on the Today show for four years until 2014 and previously told TV Week he had no plans to return – instead focusing on his family. He added: “As much fun as it was being there with Karl, Lisa, Georgie and Dicky every morning, it’s a lot more fun now.”