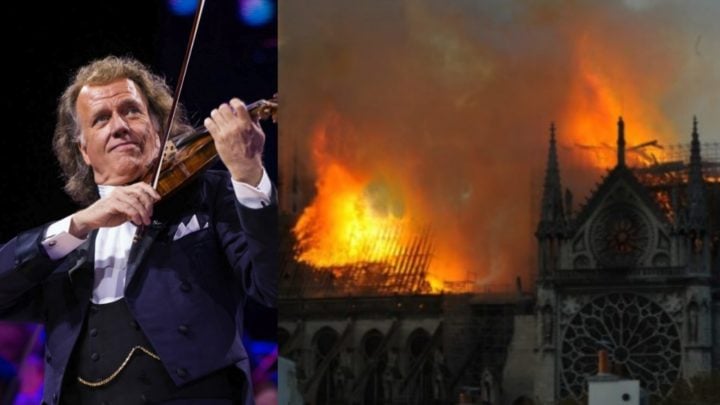 The 69-year-old violinist has offered up an incredible 700 tonnes of steel to be used as scaffolding whilst the world-renowned church is rebuilt. Source: Getty.

Many people, including some of the world’s wealthiest businessmen, have pledged cash to help with the restoration effort to rebuild the iconic Paris attraction, and now classical musician Andre Rieu has joined the charge with a generous donation of his own.

The 69-year-old violinist has offered up an incredible 700 tonnes of steel to be used as scaffolding whilst the world-renowned church is rebuilt. However, fans of Rieu who have seen him perform live may recognise the metal structure as the elaborate palace replica which he uses as a backdrop on stage.

Rieu made the generous offer on social media, writing: “Deeply shocked by the dramatic images from Paris. We would like to provide our 700 tons of steel, used for the set of Schönbrunn Castle, to help erect the scaffold for the restauration [sic] of beautiful Notre-Dame.”

The Dutch star spent an eye-watering $63 million (£34 million) creating the full-scale replica of the Schonbrunn Palace in Vienna. However the amazing set, which is the biggest concert stage ever built, actually rendering him bankrupt.

Deeply shocked by the dramatic images from Paris. We would like to provide our 700 tons of steel, used for the set of Schönbrunn Castle, to help erect the scaffold for the restauration of beautiful Notre-Dame. pic.twitter.com/vnmomLK82j

Now though, the palace has been dismantled and Rieu wants to see the steel used to create his masterpiece go to good use.

Fans were also quick to praise the musical maestro, with one writing: “A grand gesture from a great man.” Another said: “Fantastic Gesture From Andre. Not only is he a World Class Violinist. He is a very kind & generous Man in times other peoples crisis. Thank you Andre.”

While a third wrote: “Well thought André. Let us take care of the art and cultural values of humanity, and you are one of the great exponents.”

Read more: ‘It gives me shivers’: Andre Rieu on $63M stage set that left him bankrupt

Australia woke to the devastating news of the fire on Tuesday, and within hours of the blaze starting crowds of heartbroken Parisians gathered outside Notre Dame Cathedral and performed a haunting rendition of ‘Ava Maria’ as fire fighters battled to quell the flames.

Footage of the emotional moment was shared online, as the world watched in shock and sadness as the structure disappeared in flames, with the onlookers visibly struggling to hold back tears as a blazing fire ravaged the building which collapsed into dust in front of their very eyes.

Pretty much anything that can be said about the tragedy unfolding is captured in some way by this video of Parisians singing Ava Maria as they watch Notre Dame burn pic.twitter.com/CpsDHcWomG

The historic building, visited by millions of travellers each year, housed some of the world’s most prized relics, including Jesus Christ’s Crown of Thorns. According to a spokesperson for the cathedral the fire broke out at around 4.50pm on Monday afternoon, The Guardian reports.

Were you saddened by the devastating Notre Dame fire this week? Are you a fan of Andre Rieu?